By Nina aka Popot Barbie Juice
Published on 16-Jul-10
Carnival Friday in St. Lucia... it's time for the most popular outdoor Soca fete: Outrageous Sexy in Black held in the parking lot of Gaeity in ...
>> View Outrageous Sexy In Black 2010 Gallery
>> View St. Lucia 2010 Carnival Coverage 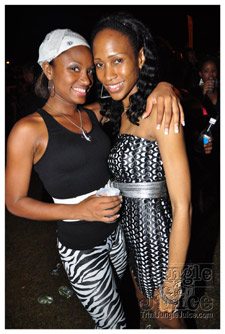 Carnival Friday in St. Lucia... it's time for the most popular outdoor Soca fete: Outrageous Sexy in Black held in the parking lot of Gaeity in Massade.

Meeting up with Bunji, Fay-ann and The Asylum Band (special shout out to IP) at the Landings Hotel in Pigeon Island, we hopped on the band's bus and took some dark, bumpy, bushy backroad to reach the event through the back entrance, which landed us in the backstage area. Performances were already on its way with local acts like Q Pid warming up the still timid crowd. Leaving backstage we were personally escorted through general admission to join the V.I.P crowd for a while (I'm not getting into the whole access issue with the promoters now since it will only get me vex again... breeeathe, hooosssaa).

A covered and elevated area was set up to provide a good view of the stage along with two bars serving up free drinks in VIP. The selection of drinks was average and it was disappointing after spending $150EC (advance price). You couldn't even get the chaser you asked for! Appetizers like chicken fingers, sushi and sandwiches were provided by waitresses floating through the party crowd... ""Hold on sweetheart where you going?""

The vibe at this point was still mellow, slow wining to Lucian artiste Alpha (ft Atomic) "Bumper Sticker" was the most action you would have gotten at that time. The attempt to create some additional vibes by having 6 Moko Jombies running (yes running!) through the general admission area turned out to be not such a good idea. All of a sudden, there was only 5! One of them did a face dive into the mud, and it took ages to get that poor girl back up on her sticks. Who was laughing??

Most partygoers were following the all black dress code, and with a few exceptions, the fashion wasn't really outrageous! "Popot Score" for that event would be a 5 out of 10! FYI: Popot means basically well displayed female assets - back and front! ;-)

The ground was muddy but once Mr. Pringles aka Superman HD and Grenada's Mr. Killa came on with "De Fence" fetegoers went MADDDDD! Lyrics were taking literally and the fence separating the regular and VIP area was torn down and mashed up. The metal barrikades in front the stage were lifted up and carried away ... the crowd was out of control (yet in control)!!! 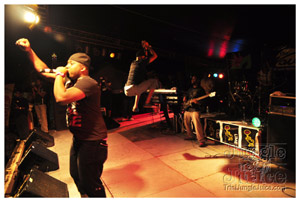 Heated up and reeaaddy, the Outrageous in Black crowd kept up the energy during & Bunji Garlin & Fay-ann Lyons performance. Fay-ann at one point even jokingly tried to out do her hubby with a lil' freestyle of her own, but in the end Garlin still reigned as the "Freestyle King". And besides partygoers singing along (word for word) to Fay-ann's 2006 hit with Ms. Alysha "Party", one of the definite highlights on the night was, oh what a surprise, the highly anticipated show of 2010 T&T Road March winers JW & Blaze ... PALAAAAANCE in the rain! Event though the Lucian palancing in the mud and gravel looked quite different to the original Trini Palance, everyone had a blast.

Thanks to the "fence throwdown" the VIP crowd was eventually invaded by some stormers, and once the The Asylum Band hit their last note, the fete was done and crowd left quite abruptly.

Queuing up quickly on the way out for some rice, chicken and fig salad and getting a complementary lecture about the "Plentycockstal Church" it was time to head home to rinse off mud and sweat!