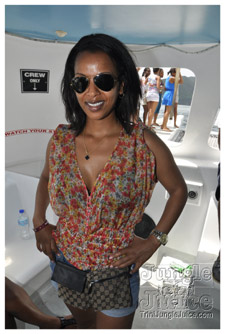 After hitting up the Lucian soca fetes during the week it was time for some daytime outdoor action: Boat Ride we say! We were in the mood for tiny bikinis, sun block and colourful bathing shorts topped off with some hard drinks and good music. Yes, yesss.. yes boss!

Reaching the Castries Marina at 10am (okay, okay we were 1 hr late) the two boats were still getting stocked with drinks and music systems. At this hour, finding a parking spot was a bit of a challenge... hummm, let's park in the bush and get a move on! Not long after, the "Carnival" and "Spirit of Carnival" catamarans were ready to take off. This was the third year of this kind of lime organized by St. Lucia's Kurt and Dale who catered for a New York based (Lucian and non Lucian) crowd as well as Locals. So on surprisingly calm waters, about 150 limers were heading down the West coast via Marigot Bay to Soufriere.

On our cat, Lucian DJ crew "Punch & Vibes" heated up the crowd with Soca tunes, as well as, Dancehall which caused some serious pole dancing action in the middle of the dance floor. Rain was pouring as well as plenty alcohol... so shortly after leaving the Northern part of the island, no one was standing still. The bar staff was attentive and quick, ensuring everyone's cups weren't empty for long.

Admittedly, in the beginning our boat was definitely the calmer one of the two, we got beaten badly by a dance off in the middle off the ocean starring a big part of the NYC crew wining on railings, ropes and posts on the other catamaran. But as I said, that was in the beginning! ;-)

Reaching the Pitons, folks rushed off the boat to head to a roadside restaurant called "Big Yard" where chicken, pork and veggie meals were waiting and a DJ was set up to continue with the entertainment.

Back on board, the promoters had a hard time dividing the crowds since a few limers spotted some eye candy on the opposite boat and it took quite some time to get each guest where they belonged, promising them everyone will reunite at a beach shortly. 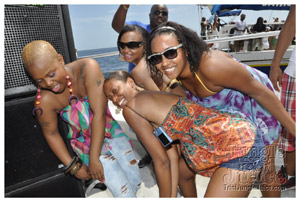 Reaching Anse Cochon, it was time to cool off and socialize with the crowds on the other boats... yes boats, suddenly a 3rd one appeared... we're still not sure where from?? After the swimming and tanning, the crews were definitely in a much quieter mood than before (blame it on the combo of sun and liquor!) and "someone" decided to jump on a motor boat and go off on a mad ride circling around the catamarans. At this point we are not saying who this person was... ssshhhhhh ;-)

Anyways, it was a loooong boatride (getting back around 6:30pm), and you definitely got action for your $150.00EC ($55USD) but it would have been nice to have the Locals as well as foreign crew a bit more mixed up, and not separated on the two cats. One big boat would have been madder than looking at each other with the Caribbean Sea in between!

Back at the docks in Castries, the party crowd headed to their cars where unfortunately some ended up in a ditch... pressssssha!

Popot Barbie Juice (""Nothing wrong with a lot of Popot"")