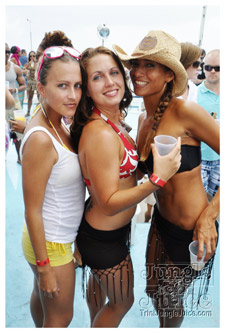 For the last two years, I've been hearing about this Harbour Lights Cruise which occurs on the Sunday before Crop Over weekend, and although I'm usually in Barbados, I just never bothered to attend. So for 2010, I made up my mind to check this event off my "Carnival To Do List".

Island hopping from Trini to BIM on the sameday, I'm going on about one hour sleep and dragging a lil'. Heh, TRIBE 2011 Band Launch was well worth it! The MV Harbour Master was schedule to sail at 1PM, so we arrived around 12:30PM to find about half the crowd already boarded and the other half liming out front. And of course, there must be the late stragglers arriving just in time for last boarding call.

Once on board, partygoers wasted no time in hitting the bars, and we doh blame dem! Did I mention this is a FREE DRINKS cruise? And so to I followed suit... except my bartenders were two self-serve wooden barrels (continually topped off during the cruise) with RUM PUNCH on the upperdeck. :-) The top deck was also where all of the main action took place. Well besides when the captain decided to sail direclty into a nearby storm forcing most folks to run for shelter (if possible with rain blowing in sideways) on the bottom two decks.

With the rain coming and going, so were the drinks. And around 3PM, the boat docked so people could enjoy the beautiful Bajan waters. This was also our que to look for food. The middle deck was serving up different types of  munchies/snacks, but the line was insane and by the time I circled back, there was only 'Bun and Cheese' left.  But wait... eh eh... there was a trusty Doubles stand onboard too! "A" is for Action... actually in this case, "D" is for "Doubles"! 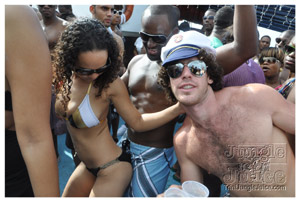 After a 45 minute stop we were sailing again, and the DJ decided to mix up the Crop Over vibes with some Dancehall. This got the vibes rolling a bit, and it wasn't too long before the majority of feters had enough alcho in their system for the entire boat to "Go Dung" (Lil Rick 2010 Crop Over hit) and get that final "Palance" before we docked after 5PM.

Although I was expecting a little more wildness, it was certainly a decent cruise with lots of eye candy. But now I await to see what our beloved Booze Cruise has in store come Crop Over Sunday!