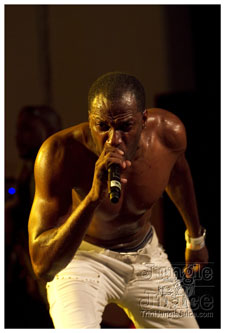 CROWD:
Lots of people but too small a location!

VENUE/ACCESSIBILITY:
The venue was not as described in the flyer. Instead it was an absolutely hot and humid warehouse type location. Access was difficult owing to the fact that the event was billed as as outdoors and at some point this changed to the 'pressure cooker" indoor location without any notice whatsoever and caused many patrons to drive around playing find-d- fete.

VIBES:
Carnival in yuh backyard ?????? this is assuming that your backyard was the Serengeti dessert and it had been moved indoors. But I am getting ahead of myself here. My journey began when, foolishly, I thought that the information on the flyer and numerous advertisements were accurate. With promises of a new and better location (OUTDOORS) with a fancy stage and lighting I thought it prudent that get in early before the rush and get myself set up. Upon my arrival to the location that my GPS had identified as Downsview Park , 35 Carl Hall Rd, Toronto, ON, M3K 2E2 - I was really impressed with what I had seen. There it stood.... in all it's magnificent splendor...., a stage with professional lighting. Granted it was not 4 levels but I assumed that the promoters had given themselves poetic licence in their description.

As I alighted from my vehicle I observed personnel putting a few last minute touches to the stage and I decided  to give them a hand. I then inquired whether they were excited to see RAVI B and the look on their faces was a definite giveaway that I was at the wrong "outdoor stage" In fact their event was to take place on Sunday. Undaunted, I set out to find the grand spectacle.

Approximately  an hour and 20 minutes later after being pulled over by officers Duncan and Bryce for being in a restricted area I assumed that the fete had been canceled. I was making my way out of Downsview park when I sighted an individual in a RUSSEL LATAPY T-shirt with a bewildered look...a look I had seen in the rear view mirror having turned around so many times. I went over to him and we swapped stories about getting lost trying to find this fete location. It was at this point that I learn that the fete had been moved to another location which from here on end I affectionately refer to as the the Devil's Sauna Spa and Resort. Upon entering the warehouse there was all but 11 persons setting up and the humidity was extreme.

Folks anytime you see fete location with a resident paramedic station  as my grandmother would say "pinch yourself"!!! Finally at 12:30am the first act went on stage with Shurwayne Winchester who did his thing and within 15 minutes of his set removed his shirt. I assure you that this was done merely for survival as opposed to delighting the female fans. Next to perform was KARMA who had almost been turned into KURMA because it was so hot. It was at this point that I decided that enough was enough and decided to take my leave for fear that I may utilize the services of the paramedic station.

So....to summarize......if you were in the mood for a WEST INDIAN version of WHERE IS WALDO and was in need of a deep pore cleansing steam bath...coupled with a mild exfoliation from brushing against other sweaty people then this was the fete or you.

If not then you could not help but feel cheated and short changed.

I would like to personally shout out the paramedic team for their presence in what could have easily been a disastrous night.