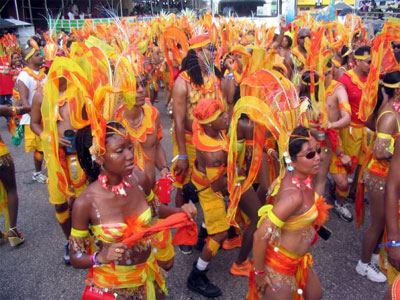 P.O.S, Trinidad (Sonique Solutions) – Following numerous requests, the Trinidad and Tobago masses are finally getting what they have craved. The desires to feel the energy, to indulge in the revelry and to re-live the “Greatest show on Earth” will all be satisfied at a major August event entitled “One More Wine”.

This Carnival Costume & Cooler Party is positively the event to shake up the summer events calendar and is set to give Carnival enthusiasts the opportunity to wear their carnival costumes one more time with their friends from various mas bands united in one unique bacchanal experience.

The event carded for Saturday August 7th will transform St. John’s Hall into the streets of Port-Of-Spain. In addition to the allowance of coolers (fully stocked with ones choice of beverages) One More Wine will also feature essential Carnival elements such as Body Paint, an All Star cast of DJs, special guest artistes and the obligatory 40 foot long music truck geared at re-creating that Carnival Monday and Tuesday road vibe.

CR Events, the promoters of One More Wine have been responsible for several well known Carnival oriented affairs and theme parties in New York and Miami and after the success of their T&T Carnival 2010 debut event Silent Morning they plan to once again unleash their one of a kind brand of entertainment to the dynamic local audience.

The July/August band launch season tends to give mas lovers that certain fiery festival feeling. Further to this, the event One More Wine aims to do more than inspire a Carnival feeling but to actually deliver a full blown Carnival experience. Due to the overwhelming interest in the event and the demand for tickets it is anticipated that this new party concept will be nothing short of a success.

For this Cooler and Costume Party the promoters have taken into consideration all factors and logistics to make this an enjoyable, accommodating experience for both the masquerader and non-masquerader partying public.

Although attendees must wear a costume or part of a costume in order to enter the event, they are not limited to bikini and beads ‘pretty mas’ outfits. For those male or female patrons who may have previously played mas but did not save their costumes and even those who never played before and still want to be part of Jammishness, there is the option of a T-shirt section whereby they can purchase an official One More Wine mas T-shirt.

In the spirit of ‘out of the box’ concepts and true T&T creativity the promoters are allowing alternatives for those without Carnival costumes such as the ability to utilize one’s Halloween costumes or to get crafty with glue, beads, decorative stones, glitter etc. and create one’s own costume.

In the latter case there will be a prize of a Spa Day courtesy Belleza Day Spa and one month membership at the Long Circular Club for most creative most original and best looking male and female costumes.

The buzz about this event has truly penetrated the local entertainment market and has attracted party goers from near and far to the extent that a shuttle has been organized to transport the South Trinidad party contingent to and from this key summer extravaganza.

The stage is set and the anticipation is high as T&T gets prepared to take One More Wine en route to Carnival 2011.