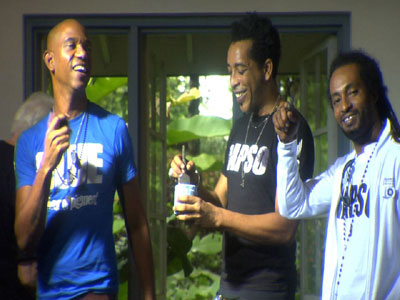 Port-Of-Spain, Trinidad (Sonique Solutions) – The film direction duo of Professor Patricia Mohammed and Michael Mooleedhar who fascinated audiences globally with their 2009 production “Coolie Pink and Green” will premiere their latest groundbreaking effort entitled “Seventeen Colours and a Sitar” at the upcoming Trinidad and Tobago Film Festival.

2009’s Coolie Pink and Green which garnered the title of ‘Most popular local short film’ at last year’s edition of the Trinidad and Tobago Film Festival was consequently screened in Barbados, New York, London and as the opening ceremony film at the prestigious Pravasi Film Festival, New Delhi, India. Thus, anticipation for the pair’s new offering is at an all time high within the creative community and among film lovers in general.

Described as a riveting explosion of paint and music “Seventeen Colours and a Sitar” centers around British born painter Rex Dixon and Trinidadian musician Mungal Patasar and explores musical interpretations of colour and visual imagery. Dixon and Patasar discover common threads in their work during this film which also showcases original works by both artists. The Caribbean landscape offers a diverse palette that feeds both artists’ intuitive and experimental ways of working.

One of the stars in the film British born visual artist Rex Dixon has been living in the Caribbean for over 25 years and has been described by one art historian of the region as “arguably the most important expatriate painter to have settled in the Caribbean in the twentieth century”.

Dixon’s co-star Mungal Patasar is an eminent classical sitarist and musician from Trinidad and Tobago, famous for his crossover work with Indian musical forms from the region. 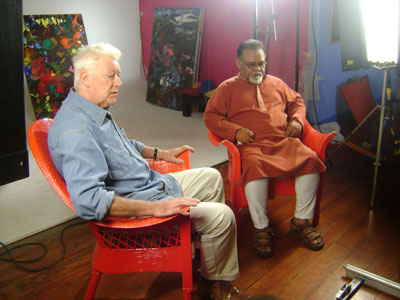 “Seventeen Colours and a Sitar” was shot in the locations of Diego Martin and Maracas Valley, Trinidad and features elements of indigenous dance and a cameo appearance/performance by T&T’s talented Rapso music trio 3 Canal.

Despite the various challenges one might experience while mounting such a production on local soil, such as inclement weather, power outages, limited budgets and funding, both directors of ‘Seventeen Colours..’ are committed to documenting the culture of the Caribbean on film. Although they both have future plans to make films in other settings within and outside of the region they consider Trinidad and Tobago a film maker’s paradise.

In just under one decade Professor Patricia Mohammed (Director) has produced several productions including “Becoming Elsa”, “The Sign of the Loa” and “A Suitable Distance” and has been lecturing in the Bachelor of Arts Film Studies Programme at the University of The West Indies where she developed the course ‘Gender and Cinema’.

Though having spent a major portion of her life as an academic, writer and researcher, she has always been an enthusiast for movies and for the film making process. The consummate artist in her own right shared, “I feel now that the kind of work that I have been doing academically may be far more accessible to a wider audience through the medium of film”.

Co-Director Michael Mooleedhar has also been credited as director and editor in numerous films such as “Queens of Curepe”, “Audacity of the Creole Imagination” and “Y-ning”. This self described storyteller, a graduate of U.W.I’s Film Studies Programme, believes that film is one of the most powerful media in the world which has the power to change people, give information and most importantly make people happy. He strives to find ways to make all of his productions more relevant and accessible for younger viewers.

This diligent, out of the box directing tag-team had a truly positive, delightful and educational experience in the pre and post production phases of this film and believe that “Seventeen Colours and a Sitar” will stand in its showing at 2010’s Film Festival.

Professor Mohammed stated, “The film draws on the expressionism and performance of both artists (Dixon and Patasar), it is by no means a “boring talking heads” documentary but one that invites the viewer into their confidences about their work. Cinematographically and musically the audience will be pulled into the studio, feel the paint brush and the tactility of the sitar strings”.

Mooleedhar added, “The film pulls from so many areas of interest that I believe it has something to offer everyone, great music, colour, art, stories, creation, destruction and a Trinidadian identity”.

For more information on “Seventeen Colours and a Sitar”:
Log onto: http://www.facebook.com/seventeencoloursandasitar