Kes The Band's LET ME KNOW on Six Flags Radio 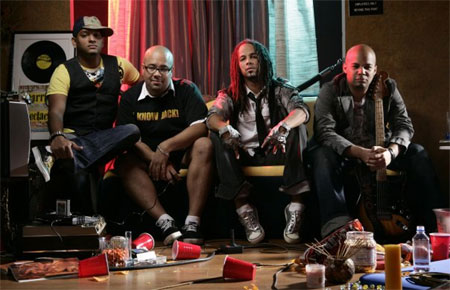 Port of Spain, Trinidad. Kes The Band has been having an amazing summer! After receiving a glowing report from Holly Hutchison - a music business veteran of 24 years who has held A&R executive positions at Capitol Records and Atlantic Records in Los Angeles, the band received news that their latest release LET ME KNOW will be featured in all the SIX FLAGS parks in the US and Canada from August 20th.

The band is currently in studio working on their next album – scheduled to be released later this year, and feel extremely blessed for the success they’ve had this summer with hits like Loving You, (their collaboration with Jamaican singer Tessanne Chin), Let Me know, and their dance track Red Light.

“Being recognized by the foreign media as well as having our tracks licensed for broadcast in unconventional markets, is proof that local artists can make a statement outside of the Carnival season, and also reach new audiences, simply by doing music they love,” says the management for KES. “Hopefully our Government will recognize the strides that local artistes are making and the great contributions that take place on a daily basis – in terms of marketing and promoting our island and culture to the rest of the world... Future assistance such as touring support and the development of educational initiatives must be made in order to develop our industry... The fact is music emanating out of Trinidad & Tobago, is not strictly confined to genres such as soca and chutney, and more attention should be placed on artists who contribute in all types of fields, whether it be world, reggae, jazz, hip-hop, R&B, rock or pop.”

Next up for the band: touring dates in the UK and Holland at the end of August. (This will mark the first time the band will perform in Europe.) From there Kes will travel to Shanghai (China) to perform at the World Trade Expo, before moving on to Florida for Miami Carnival and then Los Angeles for several television appearances!

Look out for more music, news and touring dates on their facebook page: http://www.facebook.com/pages/Kes-the-Band/7493494652?ref=ts