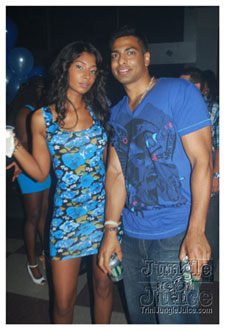 I'm blueeeee da boo di da boo dieeee! LOL! Thas all di TJJ team was singing as we rolled into the parking lot lookin' like a sea of blue... Everyone was takin' a quick drink before headin to the party so the vibes started one time! The line up moved quickly so before you knew it we were inside and ready to flex out! Guverment was already full by the time we walked in the door and although it was hard to see what was going on through the sea of smoke, anywhere you turned there was a body movin' or shakin'... ah mean even the dj's floor was as packed as the dancefloor!

For those of you who have been to this annual party, you know this was more of a reggae scene... so level smoke and level vibes! HA HA! There were many notable faces in the building which included Renegade Squad, Dr Jay, Lindo P, D'Enforcas, Vertex Sound, Lexxus Supreme, Crazy Chris, E-Man, Dj GQ and Code Blue Soundcrew. They made sure we were on our your feet all night!  Although for most of the night we heard reggae sets (which we NOT complaining about

), we could recall hearing a few people begging for their socatherapy from the Doctor himself! Just because we in a reggae dance doh mean SOCA cyah mash up too ent?!

Ah have to say that we were rel feeling the blue theme though! Almost every man and woman had on they prettiest blue dress or bess blue shirt they could find...it was a sight for sore eyes! TJJ mixed and mingled, worked and played and enjoyed a different kinda vibe.... party-go'ers were xtra enthusiastic to get their pictures taken which made our night so much better! You cant ask for more than that!

The party wined down a little after 3am but TJJ couldn't last til the very end... after all dem bogle dance we were weak in the knees! We definitely recommend you check out Blueberry Bashment next year.... if you were one of the people that missed it, enjoy the pics! LOL

Code Blue! We out!
Mizz Kayz and Empress Esi