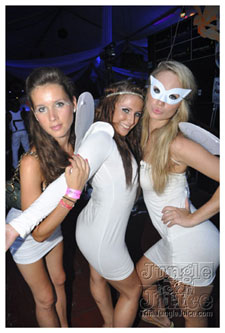 CROWD:
Bajans and tourists alike turned up to the all white fete at the Party Stand to wine the night away at one of BIM's most anticipated pre-Kadooment fetes.

Although fairly quiet and reserved as always with bougie Bajan fetes as the night rolled on and the drinks kicked in people started to really enjoy themselves.  Even more so as Frazzled finished across the road and the crowd relocated to Glow, packing the Party Stand and creating a fete thick with hard core revelers.

VENUE/ACCESSIBILITY:
The Party Stand is located by the port in Bridgetown allowing for easy and plentiful parking along the surrounds roads.  The venue itself although open air has a covering over the majority of the area in front of the stage and bars, so sorry gents no see through white dresses on the night.

VIBES:
On first arrival (prior to a few Mount Gay n cokes) the crowd was pretty subdued, but as time passed and the performers rocked the stage people started to really enjoy themselves.

FOOD & DRINKS:
Two bars and a VIP bar served the masses, which seemed to be enough. There was only one stand with food though, but this didn't seem to be an issue - especially as most were wearing white!

SERVICE:
Service was polite and quick - no complaints there.

Glow turned out to be a pretty impressive fete this year and I'm sure a lot of people are looking to even better next year!  Roll on Kadooment 2011!