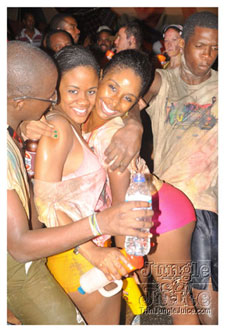 Like our Crop Over 2010 round up says, "Foreday Morning Tek Over!" The hottest talk/thing for Crop Over this year was clearly Foreday Morning. Last year, there were only five official Foreday Morning (j'ouvert) bands... and for 2010, official sources reported at least FIFTEEN registered bands – 10 of which are new!

With most of our peeps usually jumping with "Jambalasse" in past years, we've mostly heard good (and some bad) reports about Foreday Morning, so with new comers "MuddSlyde" from the Power X 4 camp and "Island Fusion" on the scene extending a warm welcome to TJJ... as Mikey would say, "I IN DAT!"

After hitting up Baje Int'l Jouvert at The Old Coast Guard Base, I headed out to catch Island Fusion. Splashing around in puddles, wukkin up and getting on stink in de rain, beating drinks and having a ball was the atmosphere in Island Fusion's J'Ouvert Band for 2010.

As expected, 300 patrons turned into 400 plus, chipping going down the road, early in the morning to some sweet, soca vibez. We swear, it felt like the rain was an added water feature to the festival cuz I a'int never see rain pour down so in BIM yet! The crowd couldn't be phased by it though. More waistline shots, juks and stabs get pelt as the rain got harder. It all added to the excitement in the air as a successful, first year, Foreday morning jump passed for Island Fusion.

As for the TJJ Red Team, they caught the tail end of MuddSlyde Foreday Morning car park jam at the Party Stand before the rain hit.

Looking forward to see what the 2011 Crop Over Foreday Morning experience promises....

ps. Did someone say Breakfast Party??!!