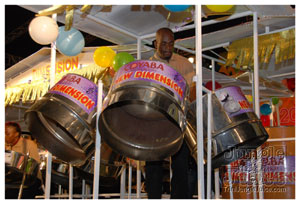 The National Stadium was once again the place to be tonight, as it attracted pan lovers and enthusiast from near and far. The Carnival event on hand was Pantastic Saturday or Pan Xplosion 2010, as it’s also called.

The show started at 8pm and tonight the stage was going to be the host of 9 bands; all competing for 1st place and the Pan Xplosion 2010 title. Now the stage was set, bands ready and silence filled the air just before each performance began. One by one each band took the stage and gave it their all.

Tonight’s show was a tribute to the Black Wizard and as such each pan side played a selection from one of the artist list of hits. Also between the changing of pan sides, Black Wizard came on and entertained the audience reciting some of his favourite selections.