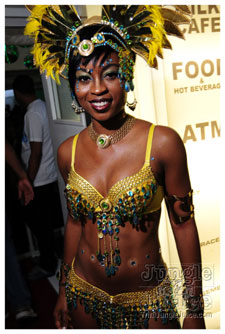 CROWD:
Well TRIBE and Busspepper combined would always pull a nice looking crowd and tonight was no different!  We were tempted to play count the maxi dress though as all the Ladies came out in their summer bbq wear!!! The timing of the event made it a little difficult for the crowd size to start increasing and for a while there we were pretty sure it was gonna be pretty mannequins and small talk all night! What happened to allyuh, it's carnival!!!! However, in the run up to the costume show, the vibes picked up and so did the crowd and once it was going, it was jam packed!!!

VENUE/ACCESSIBILITY:
Now we are pretty accustomed to feting at EGG for house music events over all three floors, but tonight was certainly the first time we hit EGG for a Caribbean flavoured party! It's easy to find and easy to park and not too long a walk from King's Cross tube: awesome!!! The event took place just on the ground floor and smoking area which was pretty small and usually used as a 'chill out' area when the rest of the club is in use. There were lots of tables and chairs around which didn't help the 'social' vibes in the beginning but all in all it was a pretty sexy venue with 2 bars and a small stage area. As the night moved on, the Ladies realised how much they valued a toilet attendant especially when witnessing some people who overdid the alcohol! Walk with your antibacterial gel girls!!! Furthermore, we are still questioning the choice of venue due to the layout of where the DJ Booths and the "Stage" was placed ... it was very questionable ... but we guess it worked out ... we guess!!

VIBES:
If we tell you the party was due to finish at 9 and by around 8 to 8.30 pm the vibes were now pumping, would you believe us??? Lol... thank god for the after party because it definitely started off as a tea party and nearly almost got the label of "an after work lime" for the first couple of hours!!! Very Disturbing!!! Moving along we must say that having an event at 2pm until 9pm was always going to be tricky but for some reason we thought the food was only going to be served until 5pm and that would make people come earlier! Anyhow,on the plus side we didn't have to queue for food and drink at all at the start! Lots of pretty people on a Saturday afternoon unfortunately meant a lot of standing around but by the time the HOT models came out in the TRIBE/BLISS costumes everyone was ready to party! Like all they needed was some half naked women and they off...so after the models came off the stage, the patrons jumped on the stage and the carnival vibes arrived! Bearing that in mind, there was an absolute shocker of a performance by K-Marvel with his new tune "Pressure On Me" ... definitely getting more praise from the crowds as well as his fans, as one adorable young lady stormed the stage and had to share some of his spotlight with a bumper to fender flex! We are sure she modelled a costume as well ... hmmm! 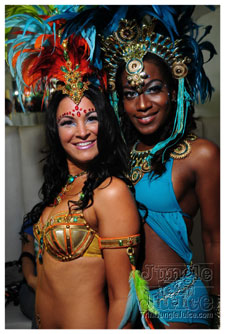 FOOD/DRINKS:
Well boy, whoever invented chits, we wish we could could hunt them down and kill them! The idea of 'food inclusive' surely means you must go back as many times as you like and eat as much as you want right ? Wrong! One chit for a free rum punch and One chit for one plate of food. There were some hungry people in the dance who weren't impressed by the lack of 'portions' available...but having said that the BBQ chicken, potato salad, rice and macaroni pie went down a treat! Drinks were reasonably priced and service was quick, with a recession busting Red stripe at just £3!

SERVICE:
Great service from the EGG team (with some few complaints from people who were excessively searched and rubbed down before entering the party ... but that is the promoters choice of venue for this type of event!!!) and lots of TRIBE/Busspepper peeps on hand to make sure you were getting everything you need. A toilet attendant would have been the only extra we needed!

COST/VALUE:
Early birds were £15 and limited advance tickets were £20 and for that you got your costume presentation (a sneak peak of 5 TRIBE & BLISS costumes for 2011) a little performance from TOP UK Soca star Konata, a free rum punch, plus one plate of food. So we would say definitely worth the early bird price...and as always if you can't get organised early, unlucky!!!

Thanks for the sneak peak of the TRIBE & BLISS costumes...ALL the models looked gorgeous! It definitely got us in the mood for Trinidad 2011!!!!