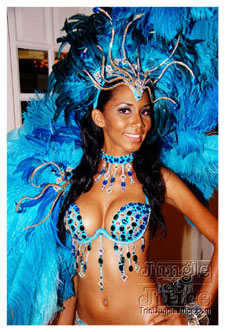 If earth is just an island then we are all island people. The philosophy IPMass stands by with the introduction of their 2011 presentation “Shades of The Universe”.

Ok so on my way to the venue surprisingly there wasn’t any heavy traffic. After meeting up with two of my colleagues we made our way to the media presentation where the models paraded up and down the red carpet. I must say not only was I impressed by the costumes, (won’t go into the details of breaking them down, you can form your own opinion from the pictures) but the selection of the models that displayed them.

Twelve sections were presented by designers: 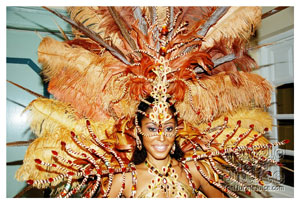 We, the media were well taken care of with a variety of appetizers and drinks while waiting for the main show to begin. But at minutes after eleven taking a look over the balcony it was clear by the number of people that were mingling on the grounds that the show would not start until much later. We were no doubt entertained by the selections of “Raw Fusion” and others. After being engrossed in deep conversation with a number of colleagues, I made my way stage side where in true Island people style, by the way the stage was laid out, you knew that something interesting was about to happen. There was silver decorative material which depicted the theme for the event “Shades of the Universe” and the stage lighting which was covering the runway where images of the universe were projected and would eventually be lifted for the show.

I would say after twelve, maybe minutes to one, the stage show began. First dawning the stage were alien life forms with a segue to a scientist which was portrayed by Raymond Choo Kong who in his wisdom assembled a team to create costumes to withstand the test of time in the hope that one day those said costumes would be discovered and restore what we knew as Carnival. Models were sealed within plastic casing and revived by the alien life forms. One thing though, these life forms all were showing a Vulcan greeting. You never know, maybe they could have been distant cousins. 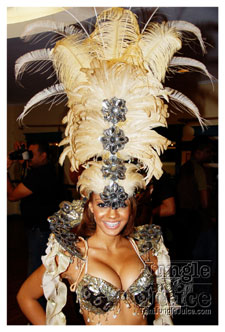 The first section was Quasar by Sonia Mack. These life forms who definitely had rhythm continued reviving the models, section by section. I must say they stayed in character throughout. The presentation was well worth the wait, as was apparent from the numerous shouts of approval from the people around me. Among the models were T+T born international model and Splash host of Centric TV-Crystal Cunningham who modeled ‘Mars Bliss’ a frontline costume for Sonia Mack. Ending the presentation was a performance by Swappi who came on stage with a segway dressed to entertain. I’ll tell you one thing, every time I see a performance by Swappi it gets better and better.

All in all ISLANDpeople Mas had a strong showing and TJJ is looking forward to jumping with you Monday and Tuesday 2011.

ISLAND PEOPLE MAS OPENING TIMES.....
Wednesday 1st September, 2010 - Public Registration - OPEN: 11:00am - 6:00pm
Their mas camp has now moved to 50 O'Connor Street in Woodbrook, Port-of-Spain, which is at the corner of O'Connor Street and Warren Street.