By Sidney aka Scorn Juice
Published on 30-Aug-10

For four (4) years I have been hearing about Bachanal Mas Band ... Four (4) years. I have covered their Band Launch Two (2) years and I always have a fantastic and wicked night out. So what's next then, I ask myself ... 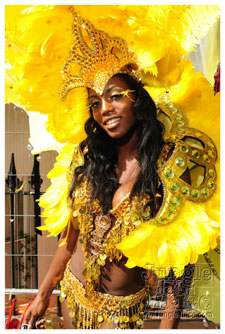 "The Most Beautiful Costumes On The Streets Of Notting Hill"

For four (4) years I have been hearing about Bachanal Mas Band ... Four (4) years. I have covered their Band Launch Two (2) years and I always have a fantastic and wicked night out. So what's next then, I ask myself ... I have to cover their Mas Band on the road. I gave that special text message to Kelly - link up the crew and crew - and yes Bachanal Mas 2010 ... Traditions! Why did I not cover this band before?

CROWD:
With years experience on this Notting Hill route and years of seeing all different types of people from all over the world I will definitely applaud Bachanal Mas for attracting a full Mas Band. Yes, thats right ... they sold out!They remind me of the Tribe of Trinidad & Tobago really in terms of how quickly their costumes sell out as well as usually one of the first caribbean bands to launch in London for the Notting Hill Season. So with a full crowd of people to head hunt and run through and eventually wine your bamsee and bumper to fender jirations one would expect and question what about the beauty? Bachanal Mas = Beautiful Mas. Point Done! End Of Talk! The sexy factor was definitely high off the charts and I for one will never miss Bachanal Mas again. Furthermore, the people were always friendly always smiling even with the cold breeze blowing on them and raising their pores.

VENUE/ACCESSIBILITY:
Notting Hill route has to be one of the best routes in the non-caribbean carnival experiences! With five (5) different train stations that you could travel too and you are guaranteed to end up on the route at any point of the day (except when their are engineering works in progress). The road itself is not a hard one in terms of too many hills or uneven patches ... but it is just a normal road ... nothing to get to excited about ... its never too dirty - guaranteed people will use the road for support as they are wining down to the ground. Lets not forget, the plastic bollards in the road that many people sit down on, stand up on, and of course jirate like if there is no tomorrow. 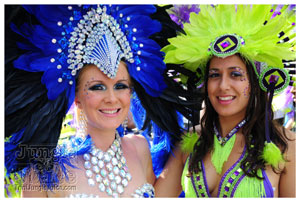 VIBE:
"I Can See Clearly Now ... The True Pretty Mas Band Of Notting Hill Has Been Discovered!!!!"
With DJ Drizzle & Specialist Crew on the ones and twos of the Big Truck pumping all the different soca tunes from all over the Caribbean - I could not complain not one bit! Some of the masqueraders were tired - Some could not care any less! The vibe in this band is undisturbingly fantastic with the majority of the masqueraders enjoying the sun and the wining music coming out of the decks! You cannot ask for anything else or anything different when it comes to Carnival & Bachanal Mas ... anything really ...

FOOD/DRINK:
Well bearing in mind that I do not think there is not a mas band in the world that is NOT all inclusive it would be pretty dumb for Bachanal Mas to be one of those right? Well they did not disappoint ... The Drinks Truck had all sorts of alcohol on it from rum, to vodka, to scotch, to all sorts of various punches and of course .. beer for the belly! The food was always present and was served without fail - by the way - Bachanal Mas has portable heaters on their trucks to keep the food warm and not in the sunlight (which causes sickness ...). Whether stuff ran out or not ... we do not know ... but I guess somebody will let us know ... Oh By the way ... The sambuca shots at 10:00 AM to warm us up was an excellent touch!!! 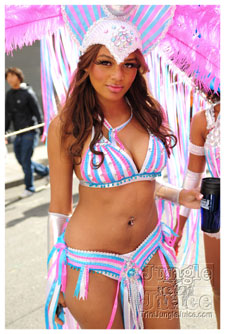 SERVICE:
Paul, Kelly & Richard ... give yourselves a round of applause (again). This band has to be the MOST organised caribbean band ... EVER! From a sort of prompt move off, to a easy to find meeting point, with a make up artiste on spot, food being served on time, drinks truck big like the red house, and of course our favourite part ... top class, top notch, and always ready SECURITY! If you did not have a band around your hand ... you would have been kicked out of the band with ease! Now we do not know if the security worked all through the day so we leave that for people to let us know ... but from what we saw ... they were working!!!!

Bachanal Mas remains in my book as the most organised caribbean band for notting hill ... loads of fabulous people both beautiful and friendly ... endless drinks and food served on time ... worth every ounce of the queen's bread for a costume! Guaranteed get your money back for this Traditional Experience!