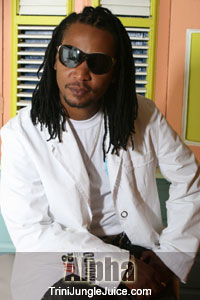 "I want the impression to be an everlasting one when persons see me on a stage performing. I give it my all, lots of energy and interaction with the fans and letting them know that I am doing this for their enjoyment." Those are the words of Wenhal Gerald known in the entertainment circles in the Caribbean as Alpha. Also known for his passion and aggression for tackling the beat and the rhythm when he gets on stage, Alpha has won the Soca Monarch title three times in his homeland Saint Lucia and is the reigning Groovy Soca monarch there (2009).

Alpha's love for music started within the Calypso arena when he was just fifteen and a high school student. At the time he participated in several school competitions which he won, leading some individuals who were involved in the senior calypso tents in Saint Lucia to draw him in. At the senior Calypso level Alpha made a mark from day one, making it to the semi finals of the national calypso competition. But he says he always had a hunger for more and felt that Calypso was too seasonal. And so in 2004 along with the band "Fondacion" (Creole for Foundation) he composed the soca number "Down De Road" which went on to win the Road March title in Saint Lucia. It would be the first of many titles for the young singer.

Alpha went on to win the prestigious Soca/Party Monarch titles in Saint Lucia three years straight 2004-2006 with the songs "Down de road" (2004), "In De Ark" (2005) and "Happy Birthday," (2006). In 2009 he won the Groovy Soca Monarch with the song "Cyar Wait." But Alpha is not just about winning titles but winning over the hearts of fans wherever he performs, with his commanding stage presence, commanding vocals and high energy delivery. He was the first Saint Lucian artiste to be signed by telecommunication giant Cable & Wireless (now LIME), in 2006 along with Trinidadian Soca superstars Machel Montano, Bunji Garlin and Shurwayne Winchester as well as Dancehall superstar Beenie Man of Jamaica. 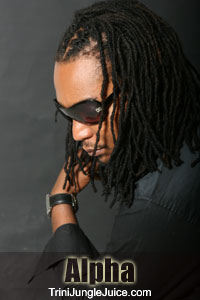 Alpha has performed in London, Trinidad, The US, Costa Rica, Dominica and Maguerita displaying his love for the music and the fans with his infectious melodies and hooks. He has also worked with producers from Saint Lucia, Trinidad and Dominica and collaborated with well known female Soca singer Gail-ann on the track "Carnaval Nou La" a song which celebrates his French Creole Heritage and West Indian carnival.

Over the past few years Alpha has been hard at work recording single after single all year round and putting his own band together Triple A which this year made a big splash when they debut during Saint Lucia's Carnival. With his music, a couple of music videos and a CD on the way Alpha is getting set to hit the road this Winter with his first stop being Canada and Dominica. After this the tour will continue throughout the Caribbean ending with a major concert and album for the Summer of 2010.

His music he says is not seasonal it is happy music for happy people, celebrating life and the universal language of the music which is love, peace and happiness.