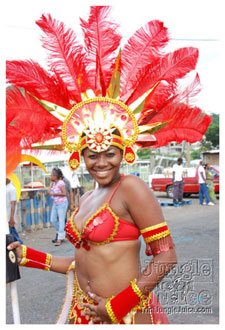 The midday hot sun is beaming down and judging from the clean streets, one would never tell that Carnival Devils were roaming through out St. George’s hours ago in true J’Ouvert fashion.

With a 3PM rendezvous time at the hotel, we were a tad bit concerned that we were going to missing half of the parade. Nothing to worry about... Spice Mas Monday & Tuesday Road March generally runs around 2-7PM. So we pulled up at the round-a-about just before The Carenage minutes to 4PM in order to catch the action from the top.

Where is Everybody? Is British Airways running another get away special? Okay, no scene. Our first order of business was .... FOOD! BBQ chicken and fries!! As usual, Frenchie Juice ... now officially called ‘Camel’ ... had to call down some cold beers. 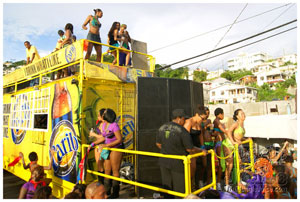 The mas bands started passing one by one, with about a 5-10 minute gap between the earlier bands. We saw ‘Fancy Mas’ bands Commancheros – “From Drought to Sprout”, Helen Marie & Associates –“Refelections”, RKD & Associates – “VAT (Very Attractive Tourist)” and Spices & Friends – “Sailor's Land”, but it wasn’t until we saw the huge Carib truck that we felt our carnival adrenaline kick in … it was SummerCrew Reloaded with their 2010 presentation “Celebration” to the rescue.

There was probably no more than 100 masqueraders on the road today with SummerCrew, but the vibe was just right as drinks continued to pour and the popular Spicemas 2010 Soca hits (Tornado ... Road March front runner, Jammin' On De Road, Aye Apawah, No Prisoners) played. We jammed with them down The Carenage and back up towards Lazy Lagoon as the sun set. 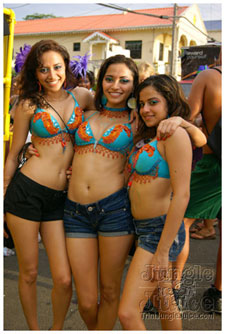 It appears that with all of the excitement around J’Ouvert and Monday Night Mas, Monday’s Parade usually has a low attendance whereby Tuesday Parade of the Bands (Last Lap) is the BIG day.

With a few hours til’ Monday Night Mas, it’s decision time! Are we going straight through into the wee hours of Tuesday morning or are we going to ‘lock back and come back’? With food on my mind, it was back to Spice Island Resort for a 5 course meal at Oliver's Restaurant. With Frenchie still inna de Mas Tornado chasing, my absolutely delicious meal was followed by a comfortable pillow.

ps. Where did Santa Claus come from? I guess Christmas comes twice a year in Grenada too! :-)