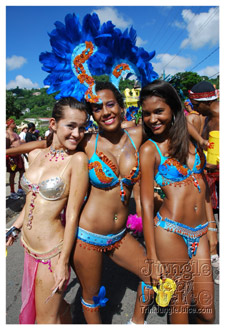 Tuesday’s meeting point is at Lazy Lagoon for 2PM to get things started right with SummerCrew. And as told, everyone is out in their numbers today. All the pretty, pretty dollies are making final adjustments to their costumes and applying the final touches of makeup (and carnival glitter and gems). A quick glance around and we already knew based on the quality of the sexy masqueraders we’re seeing, that today was going to be a good day (and tonight was going to be a goodnight for some)!

Just after 3PM, SummerCrew hits the road. A quick stop at the chenet/ackee man, who confirmed that ‘Skin Up’ (as they call it in Grenada), did in fact pay for everything and showed us some Spice Isle love with a free bunch of skin up. A couple of TJJ TV interviews and it was time to execute our mission for the day – Jam on any gyal we meet on the road (“Jammin' On De Road”), hold on for our lives (“Tornado”) and avoid paying VAT on any stray wine (“Tax on Dat”).

Not more than an hour into our jump ... truck halt, music stop! Obviously there must be some emergency one would think?? Before we could properly investigate, we were being summoned over the mic. “Trini Jungle Juice, please come front to take photos of the different sections!!” This was a 1st for us ... Road March get put on pause yes! LOL. *Snap Snap* “Spiiiiiice Mas 2010 ... yeaaaaah!!” and we’re rolling again. Wait a minute... there goes Santa Claus again!! LOL 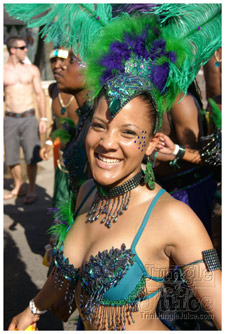 The team splits up to cover other mas bands, while the jamishness continued in SummerCrew. It’s expected that Trini’s had to be right in the middle of it! :-) We were palancing along The Carenage about to get to the judging point, and braaaaapsssss .. Black Eyed Peas’ “I’ve Got A Feeling” followed by Shakira’s “Waka Waka” plays. And did this bother any masquerader? Not in the slightest way!! The jubilation continued as the DJ kept on rotating sexy female revelers on top of the Carib truck every so often, keeping it fresh.

At the end of the route, the band drinks truck made its way into town as the music truck u-turned. However, unlike yesterday, the route was too congested with other bands so the jump back quickly fell apart as masqueraders searched out other means back to the Lazy Lagoon, including water taxis across the harbor. Unfortunately, the after party was not at Lazy Lagoon. Bananas, here we come (again)!

Congrats to Otis for taking the 2010 Road March with his runaway hit “Tornado” (produced by Trinidadian Kerwin Du Bois).

Rocking a Grenada flag in the spirit of Spice Mas,
Dre aka The Carnival Ref