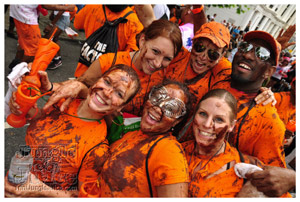 **Disclaimer - The words and descriptions outlined in this review are the thoughts and opinions of One (1) individual ... If you have something to express ... Feel Free To Leave Your Feedback Below**

The thought process for Carnival Sunday in Notting Hill 2010 has to be a very intricate thought process! It is described as the "J'ouvert" of Notting Hill, not really in its true sense, but something along the lines of 'mas before the big day and yes, DIRTY mas'.

CROWD:
Chocolate City and Abir shared the same band - Cocoyea or some people would say they used Cocoyea Trucks. This then means that there was not any difference between Abir and Chocolate City. Let's not make this a stupid statement, but besides the chocolate on the Chocolate City mas members, I really could not tell the 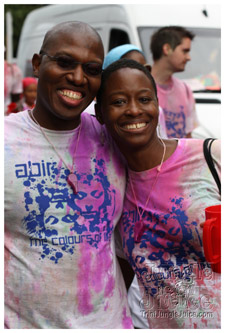 difference between the two "sections" ... Some people kept asking me ... Where is Abir??? They were there I must admit ... I was also told they were "sold off". Chocolate City definitely had hundreds of people but I cannot say the same for Abir ... Am I wrong??

Liquid Gold, on the other hand, due to the fact that this is one band with their own unique identity i.e. Yellow Paint ... The size of this band ... hmmm ... however, like uruk-hai (bore the mark of the white qizard) they all bore and wore that special and unforseen characteristic that makes this band crowds factor very unnatural however, ultimately attractive ... you could NOT miss a Liquid Gold Mas Member!

If you are thinking so who out of these three (3) had the sexiest and attractive people this year accompanied with the idea of a "good" time band ... The winner goes to Chocolate City. Most definitely all the Chocolate Mas people from last year who left Pure Lime for whatever disturbing & astonishing reason, and who absolutely love to bathe in Chocolate will obviousily go to play their "J'Ouvert" with Chocolate City.

VENUE/ACCESSIBILITY:
As always we are on the streets of Notting Hill - with easy access via the ever so important London Underground and also the various buses that pass through the area. The road itself as I have said and I believe is really perfect - not that it is possible - but, there are no steep hills to walk up, no disgusting pot holes or even the unnatural digging that can cause injuries (I did not see any) ... But then again, when people are drunk, the slightest thing could injure them. I do and I will always say ... the bollards on the streets of notting hill will always remain a wining/dancing prop for most people. 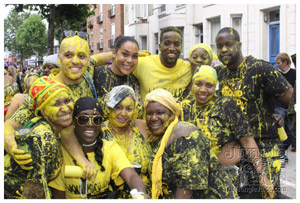 VIBES:
This has to be important - now when comparing three different bands all with the equal share of time spent back and forth in each band - it is very difficult to guage the FULL vibe factor. However, I leave it up to patrons to express their thoughts and opinions ...

Chocolate City without a doubt had an immense, immaculate, intricate and interesting vibe factor which stemmed from the following: *edible chocolate on people's skin always attracts attention (licking people, hand prints on breasts, bottoms and male pelvic areas)
* the idea of dirtying each other with something I could lick off each other I believe turns each other on
* the chocolate dispensers were small milk cartons which I believe added to the excitment ... "Okay I Am Reloaded!!!" ... Everyone had their own ammunition!

Abir was a real eye opener ... well ...
*I really am not sure what to say since they were all mixed into the chocolate city 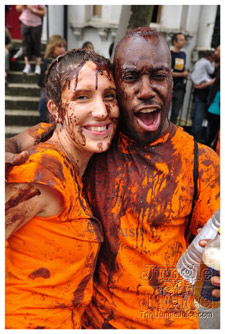 *I saw no-one pouring or spraying paint on one another makes me wonder how did they do the deed ... Someone correct me please ...

Liquid Gold presented itself in all its "gold"
* pouring yellow paint from your own ammunition will always create a hype and vibe
* trying your best to stay clean, just as in chocolate city, always provides the best mission on the road ..."Let me wine on you and dirty you up .... Ah yes !!! ... We wining in the yellow paint"
* putting a yellow paint palm on someones bottom forever contributes to vibes and always increases the vibe factor as well!
* this band also has the powerful inspiration of bringing in the true J'Ouvert ingredient ... "You Cannot Play Mas If You 'Fraid Powder!" ... yes folks Liquid Gold mas members bring out their Baby Powder just for this occasion and we mixing it up in the yellow paint ... *rolls eyes*

FOOD/DRINKS:
These three (3) bands were all-inclusive or should I say drinks inclusive for one of them and all sorts of snacks and breakfast or just a breakfast snack. The idea is you drink as much as you want and you eat some food to keep you going. One band I believe were stopping people from drinking too much because they were coming back too often. I am not sure if any of the bands ran out of alcohol ... Can someone tell us? The quality of the drinks we are not too sure but I did see the walking man, a few red stripes, some punches of rum, a black bat, the famous weights of apples and of course the most recognised native who has been exported from Trinidad to so many different countries. 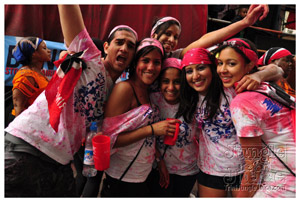 SERVICE:
This is where it gets tricky for most people. This is what sometimes determines who most people will decide to play with the following year. People Wonder The Following:
Did I get the drinks that I was promised?
Did I Get the food that I was promised?
Was there security to take stormers out of the band?
Did I get the jersey/costume that I paid my pounds for?
Did I get the DJs that were advertised and who I paid money for to come and play that good music?
How long did I spend to get a drink? How long did I take to get my food?
If something is happening that is changing the course of the day was I informed? haha ...
I leave it for the general public and all patrons to express these thoughts ...  However, from what I saw ...
Chocolate City has drinks flowing like water with few interruptions or should I say a few blanks? 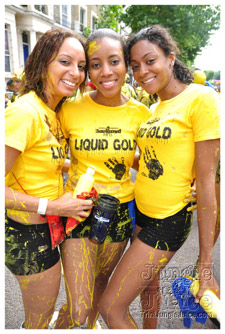 Liquid Gold brought the food, they brought the snacks, they definitely has drinks running ... I swear by 11:00AM people were CRUNKED!
Abir ... I do not know ... I know there was a drinks truck, I know they get food and the works that was promised ... I did not hear any mishaps about Abir when it comes to service ... The Abir committee really takes pride and they are usually around to help people ...

COST:
Chocolate City was running at a jubbly price of £25.00 for the day which gives you all access to your milk-chocolate and drinks/snacks. For the people who found the other bands were too much money and just wanted to bathe in chocolate then definitely £25.00 was worth your douche!
Abir had two sections one running for £30.00 which gave you all the soft drinks on the truck and you got I believe a snack or breakfast; and then there was a £50.00 fee for those people who want to come to mas with their hands swinging and all they do is put out their hands and say "give me please!" ... so for £50.00 you got an all inclusive section with the works ... was the £50.00 worth it ... I do not know ... I think it is worth it ... but then again ... *shudders*
Liquid Gold charged between £25.00 to £30.00 depending on when you book your place in the band ... and you got your drinks ... I would have to say that from what I saw this was worth the poundage because I am still trying to find a fault in Liquid Gold really ... or maybe I am blind? Is there a fault?

Bearing all in mind that I have witnessed and all that I went through on this day, I think it is a fair judgement when I say if I had to choose between these three (3) bands to play J'ouvert - I will play with Liquid Gold ... it is just something about the yellow paint ... I really just think it is what

Scorn Juice
... worth the bitter after taste ...