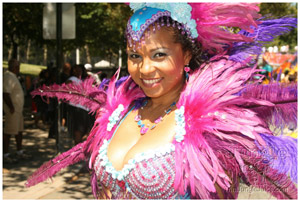 One Word : RAMAJAY! . . . Congratulations to Ramajay for being the number one band on the parkway this year, holding the first place position as Band of the Year for the Brooklyn West Indian Day Parade. The entire TJJ fam was in the Ramajay band and it was an Experience! Thousands of masqueraders flooded the streets of Eastern Parkway as they played a mas for the New York Carnival! Can't forget those who doh need ah band or a costume to Chip On D Pavement! They were out in heavy numbers and created their own band.

Hurricane Earl decided to go back where he come out! We ended up with amazing weather for the Labor Day weekend. Plenty of hot sun! We started off our morning, chasing down the truck from the mas camp and had a journey up to Buffalo Ave to begin the parade route. We finally made it, arriving to a sea of people clad in a variation of different color glitter and sequins, as they primed to parade the streets of Brooklyn with their bands. Bajans, Grenadians, Vincys, Haitians, Lucians, Jamaicans and of course Trini's to name just a few, were amongst the many nations out to display their West Indian pride and represent their culture on the Parkway. 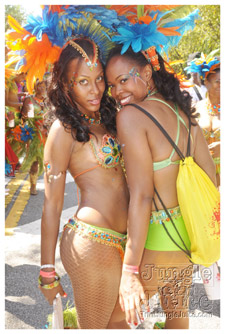 We covered the entire stretch with nothing but music and a truck loaded with liquor to fuel us. Revillers had the baddest behavior! As if they formed a Tornado!!! Ladies knocked men to the ground with their bumpers, and men daggered outta control. One of the wickedest Labor Day experience's ever!

Goons : Allyuh need to stay out dem people band. Revillers pay money for costumes and want a Carnival experience with other Revillers, not mix up with a hundred of you floodin d band. Buy a costume next year if you want to jump up freely on the road. Big up the Ramajay Marshalls for sorting it out and roping off their masquaraders for a safe Carnival experience. The word in Brooklyn right now is, if you did not play mas with Ramajay, then you did not play with a band! Hmmm, I wonder? But I must say, the vibe was beyond nice and every section had gorgeous costumes, worn by gorgeous women...and men! ;)

Much love to the City of New York for allowing us to have a safe, smooth parade and for allowing it to proceed pass 3 p.m. Thanks to the men and women in blue, keeping us safe and attempting to keep things organized. We know you all have the urge to take a wine here and there but have to fight the temptation to keep us all safe! We appreciate it!

Well that tops off another NY Carnival experience for the TJJ Fam.

-Junior Juice over and out!