2010 'The 20th Anniversary of the big band KROSFYAH' Review 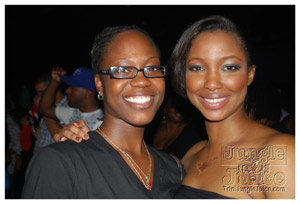 CROWD:
Despite the rainy weather outside, Koolhaus slowly but surely filled to capacity by the time midnight rolled around.  The crowd was a nice mix of socialites, pretty fashionistas, preppy ole school, comfy next door neighbour and of course the winer girls & boys.  Best of all it was a crowd that moved. No stand up in a corner staring at the woodwork here. TJJ spotted Dr. Jay, Dirty Dez, Eman, D'Bandit, Loudmouth Chiney and Darling Nicky just to name a few. All in all it was a happening crowd... yea!

VENUE/ACCESSIBILITY:
Koolhaus whilst big and can comfortably hold a large crowd is always tricky to get down to if you aren't driving and if you are driving parking, whilst available, requires a bit of patience.

VIBES:
The vibes was sweet.  Even though TJJ was working hard the music was too nice to resist.  Man they had really good djs.  About midnight E-Man started warming up the crowd.  Edwin and Krosfyah hit the stage a little after 1am it was heat in the place.  Talk bout the vibes was nice.  Everybody was moving. Edwin Yearwood & Krosfyah drop their classics, they drop their new hits and they even did covers of popular Carinal 2010 hits such as Palance.

FOOD/DRINKS:
The general cash bar party drinks, nothing to exciting or exotic unless you got pre-ordered VIP service. Looking at $5 up per drink, although I think we could do with a little less chaser and a little more alcohol ... lol

SERVICE:
Service was decent, however people got wet in the rain coming in!

I mean to say it was the 20th Anniversary for Edwin Yearwood & Krosfyah as well as the 10th Anniversary for Soca Therapy.  So congratulations go all round to you guys. We looking forward to hearing more music and to being entertained by you for many more years."