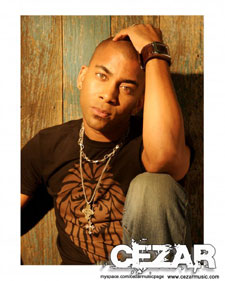 Singer/songwriter/producer Cezar impresses on his latest recording She Said. The sugar coated mid tempo ballad which was shipped to US and Caribbean radio for airplay consideration a week ago, reveals a mature and sincere side to Cezar’s artistry.

There are four different mixes to the track. The reggae vibes mix was produced by Andrew ‘Preggs’ Thompson and Elton Brown for State of the Art Music. The club mix was produced by Conroy Forte and Ryan Chin for Washroom Entertainment, while the acoustic mix was expertly handled by Rohan Dwyer.

A house version was produced by DJ Josh from Bulgaria.

In a release to the media, Cezar explained the story behind the She Said. ‘She Said really came out of the track itself. I received the track from a friend and producer and after listening to it for a short while, the idea for a melody popped into my head using a repetitive ‘she said’ line. After that I drew on conversations I had with friends or overheard about the things that women say and feel about relationships’.

Cezar added ‘I decided to make the song be a story of a conversation I was having with a woman who had been hurt from a relationship that she was involved. The rest just fell into place. Sometimes songs write themselves and this one did that in many ways’.

The talented Cezar has worked with a list of who’s who from the reggae music fraternity including producers Tony Kelly, Steven ‘Lenky’ Marsden, Louis ‘Flabba’ Malcolm, David Kennedy, and Mario ‘Mario C’ Campbell.

He has also written songs for the likes of Tami Chynn, Wayne Marshall, Maya Azucena and soca artiste Machel Montano among others. His impressive writing ability gained him second place in World Music in the 2006/07 International Songwriting Competition for the masterfully penned “Keep On”. Out of 15,000 songs from around the world, Cezar’s sole entry came out on top.

The remix earned Cezar the honor of being the first Jamaican ever to have his song endorsed and licensed by Coca-Cola, who used it as part of its Beijing Olympics campaign; complete with a limited edition Coke bottle bearing Cezar’s name.

She Said will be featured on Cezar’s forthcoming album Musaic.

Cezar is currently being managed by Rodney Hill of RHH Music Corp.