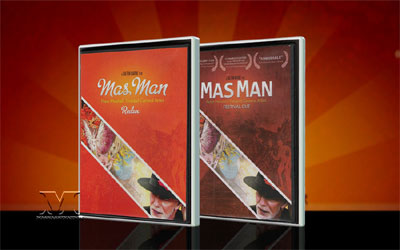 Mas Man (The Final Cut) based on the life of Peter Minshall produced and directed by Trinidad and Tobago national, Mr. Dalton Narine has been selected by Georgia Caribbean Carnival, Inc. as part of its quarterly series ‘Conversations on Caribbean Culture’ to be screened in DeKalb County.

Mas Man, will be screened on Friday October 22, at the state of the art, Porter Sandford III Performing Arts & Community Center, 3181 Rainbow Drive, Decatur Georgia 30034. A matinee show at 4 p.m. and 7 p.m. evening reception and show.

The film examines Minshall’s life and art, a tapestry woven from multiple threads that include his “masography” coursing through 26 years; his design and stage acumen (documented in the 2006 presentation “The Sacred Heart”); the Carnival stage (the Mas) in Trinidad preparing him for the world stage, Barcelona, Atlanta and Salt Lake City Olympic Games contribution; and his set pieces of political protest and entertainment provoking parallel emotions in major North American, European and Asian cities

The film has been retooled, featuring an incisive interview and new footage, and was recently featured at the opening of the New York Film festival. Producer/Director Dalton Narine, has taken the film to the UK for viewings in Cardiff and Port Talbot, Wales, Worcestershire, England and Tipperary, Ireland. Other screenings include Bangkok, Thailand; Pretoria, South Africa; and Florida and Ohio, USA.