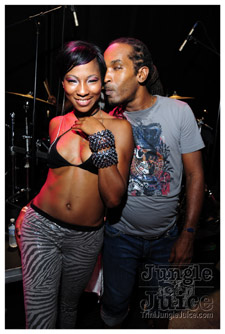 CROWD:
I met a girl and she name was Tayee... she want to teach me how to make chutney, invite me by she mother down in caroni...woi.. let me show you how it real easy !!!!' Lol... for some reason that was the song that came to mind when you picture this crowd... because let me tell ya the Tassa and the chutney had this crowd wassy! You should have seen them on the stage! Nothing could stop them; they jump on the stage, they wine on Machel, they roll to the Tassa.. one word.. ENTERTAINMENT! Venue was packed and the crowd was mixed, if a little bit too drunk but maybe that's the sign of a good fete...? Eye candy wasn't quite as exciting as last year but you could seek them out if you looked hard enough !!!

VENUE/ACCESSIBILITY:
So we are back in Hallandale after Last night's awesome Super F.R.I.E.N.D.S and whilst being back at Gulf Stream Casino and Race track, tonight we on the outside right by the Race track itself.  A very large corner of which was dedicated to the Stage and performances. It is an awesome venue for an all inclusive day fete but we were a little confused over the General Admin/VIP entrances and sections this year ? The part of Gulfstream used  was completely outdoor which added to the day fete ambience. Ladies walk with your flat shoes though, like last year there is plenty sand!
VIBES:
Now it's hard not to compare this to 2009 (see coverage) as this fete was so awesome last year that we were 100% adamant we wouldn't miss it again! Now we can't say exactly why 2010 wasn't quite 2009 but something was definitely missing! Was it that Machel didn't close the show this year? was it that the generator blew up half way through ? (yes actual smoke coming from behind the stage!!!) or maybe it was a slight change in crowd...? who knows... but we are hoping some of what made 2009 so great would be back in 2011! Having 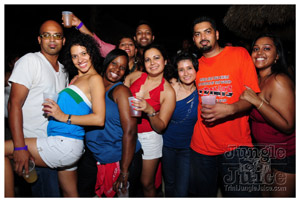 said that... people did have a time... some people thanked us for rating this fete number 1 last year as they had an absolute blast... some people left when the vomitting started (no lie!!) and some were left with the feeling something was missing. Despite the generator hiccups, the performance from Machel and the HD family was off the chain and contained enough energy to light up the whole room (was it them that overheated the generator ? lol) and even when the music cut off later...the Tassa drums came on stage and the girls and guys wasted no time getting up in the mix, rolling dey belly !!! Pure Entertainment ...where was the TJJ video cam? That was something you had to see...

FOOD/DRINK:
Ok so this is a little confusing! There were two parts to tonight's venue...General admin with a cash bar and VIP with al inclusive food and drinks. However, for some reason when Machel came on stage the gates that separated the two were opened and all of general filtered through to VIP. So for those in VIP...you might be wondering why did you pay for VIP???!!! hmmm...anyway that aside, food did run out but props to the promoters who went away and stocked up to come back with some bess chinese! The lines looked long but it paid to be brave because they moved fast! Lines for drinks were a little long too but again, stick with it and you got what you wanted! 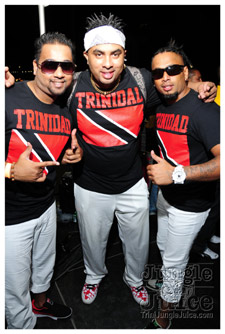 SERVICE:
The VIP/General confusion was a bit of a let down here. However, running out to stock up on food and utilising the Tassa when the generator went down showed a huge commitment to keeping the fete buzzing :)

COST/VALUE:
Ok so $35 for general and $70 for VIP...seems pretty reasonable right? Well we thought so too until the gates opened up... at that point if you were in General you were thinking 'sweet! suddenly it's all inclusive for $35!' but if you were in VIP...you were probably thinking why spend the extra cash?! So our humble advice for 2011...the fete was reasonably priced either way with stacks of entertainment but next year keep it simple please! Make the whole thing all inclusive and have one price...we are confident you will still pull a crowd!