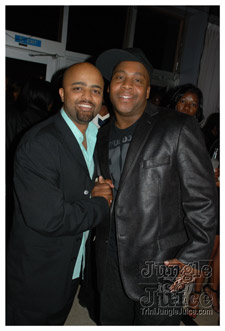 Jay Martin, one of Toronto’s most renowned comedians celebrated his birthday with hundreds of supporters and a belly full of laughs from an All Star Comedy cast. This cast included Trixx, Azfar Ali, Sharif , solo female comedian Keesha Browining and many others who had the audience rolling with laughter till their bellies nearly buss. Headliner Alex Thomas from the Jamie Foxx show tickled our funny bones even more with his dance moves and mike theatrics as well as a trip down the musical memory lane.

Jay’s birthday was no excuse for him to escape being the subject of the jokes. In fact, it was more of a reason to be roasted by comedian after comedian and the host, most of which seemed to have some memorable story to share.  King Jay seated in his royal chair had the tables turned on him as he was the centre of many of the jokes of the evening. After the show, the birthday guests shuffled out of the theatre and into the main party room which was decked with Black and Silver fit for a milestone birthday celebration. For those who still had belly room after all the laughs, five food stations including Island Mix Restaurant ,Berril’s Pepperpot, Mainsha Plus,Harlem Underground and Jamaica House Restaurant  provided the options for the night’s dinner.

With dinner and the show complete, Toronto’s leading deejays including Lindo Pand D’Bandit together with The Voice of the Vibe, Kid Kut got the party into full swing in no time at all. The feteing continued into the wee hours of the morning with another moment of spotlight for Jay as everyone serenaded him with the birthday song and watched the cutting of his cake.

Jay’s milestone celebration was definitely a memorable event for all those who celebrated with him and we’re all looking forward to the next one.
Happy 40th Birthday Jay and Blessings to you from your Toronto family!