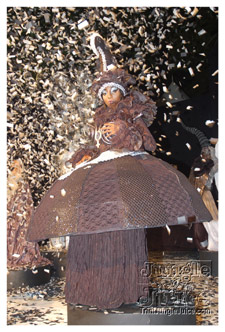 CROWD:
This event didn't have a mass gathering of people and appeared to be somewhat more of an intimate function. The crowd present consisted of invited guests, masqueraders, media and the man who seems to be most present at all the band launches these days ... the President himself,  George Maxwell Richards. Also, folks at this band launch were definitely more on the mature side of life when it came to the age demographic.

VENUE/ACCESSIBILITY:
Tonight's feature was held down on the western peninsula of the island. Its been a while since Mobs 2 formally held any functions, but tonight was special. Not only was Mobs 2 the venue for Mc Farlane's launch, but it was also the re-opening of the venue itself. There was also a little twist that might seem ironic as well ... Brian Mc Farlane was also the designer responsible for the new look of Mobs 2!! Yes folks Mobs 2 is going through a transformation and has officially finished phase 1. So far from what we saw, the place looks spectacular! We can only imagine what the finished product will look like, although the designs drawn up give us a general idea of what is to come. Nice!!

VIBES:
Vibes ... for tonight lets call it anxiety lol! Brian Mc Farlane is the present holder of the large "Band of the Year" title, and the question on everyone's mind usually is "ah wonder what is he going to bring out next year!" Well tonight that question will be answered, but patrons are just going to have to wait until the presentation kicks off.

Nearing the time of 10:30 PM, the Alternative Quartet kicked off the on stage activity, capturing people's attention and encouraging everyone to gather stage side. Shortly after their rendition of "Oil and Music", the Mas Presentation began. Stage props of fishes and birds graced the stage opening the way for the introduction of a huge clenched fist, which gradually opened, revealing an eye in the center of the palm.

After this, section after section was displayed as Mc Farlane himself narrated the story behind his theme ... "Humanity, Circle of Life." In keeping with the theme, most of the costumes were primarily black or white with lots of silver trimmings. We could go on to write a thousand words here, but it in no way could truly describe what we saw. Suggestions ... take a look at the pictures :-)

After the presentation, another live act closed off the show. Roy Cape All Stars came on and set the crowd in action. Frontline singers Blaxx, Rita Jones and Olatunji pleased the crowd with their versatility and ability to play selections that their audience could relate to.

FOOD/DRINK:
It was an All Inclusive event. This meant premium and top shelf drinks were available at the bars. There was also a wine bar present. On the food side, there was also a wide variety available ranging from mini Roti, Bake n Shark, Phoulorie, Accra, Corn Soup, all the way to the very tasty Crab filled Dumplins. We definitely recommend this dish! After wards for those with a sweet tooth,  there was desert in which one could choose from an array of local delicacies, such as the likes of sugar cake and tamarind balls just to name a couple. Is your mouth watering as yet??!!

SERVICE:
The level of service was on point. What they said they would deliver ... they delivered. The entire event seemed well orchestrated and if you had any questions, someone was there to address your concerns.

COST/VALUE:
Advance tickets were sold at a price of $400 each. At the door the price was $500. A bit steep but the service was good, drinks premium and food tasty ... include the Mas presentation and then come to think about it, not a bad price after all.