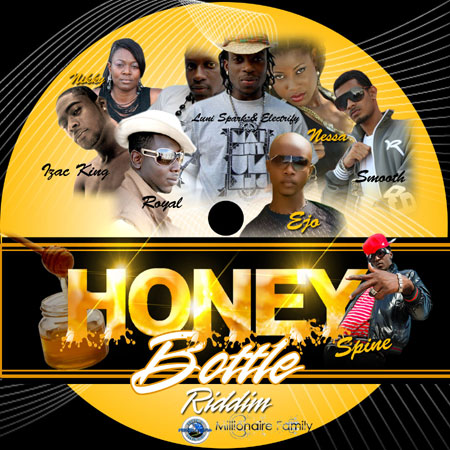 Holy House Production is coming to cause it in 2011.

You’ve heard the name, and by now you’ve lapped up every melodic note of their contagious musical vibe, much of which has been recorded by the Millionaire Family. As Carnival 2K11 approaches however, producer extraordinaire, Mr. Spine says the time has come to open an avenue for a new group of youngsters.

With a brand new riddim and a brand new vibe, Mr. Spine will on October 22nd, release the first of seven crossover Soca tracks, all of which are from new rising stars under the Holy House Production banner. “My mission is to create an avenue for as much youths as possible with proper guidance and good music,” said Spine.

In 2010, Spine unleashed several hits onto the scene, and with the taste of success still strong, he continues.

This time around, Smooth, Nessa, Nikky, Izac King, Royal, Ejo and Lunni Spark & Electrify- will start the 2011 season on the Honeybottle Riddim. “Their voices are all sweet, fresh and just what the industry needs,” said Spine. “Their melody is sweet to the ear, like honey is sweet to the taste buds,” he added.

Spine has always been a strong advocate for local music. Having lent his vocals this past summer to a track called “Girls Time,” alongside Fadda Moses, the super producer who wears countless other hats in the entertainment world, knows what it means to be an artiste- the rigors of the job and the critique that often comes along with it.

“I think growth is always good. New is always good the new is always unexpected so you never know what’s coming,” highlighted Spine and with a lot in the pipeline, this young entrepreneur’s got his eyes set on the stars.

Some major releases from a few international superstars in collaboration with local Holy House artistes are in the cards for the year ahead. Spine says he believes there’s strength in numbers and with that mantra a constant reminder of his initial goal- he says, “If youths out there think they have what it takes, we’re opening our doors to them- email Holy House Production at holyhouseproduction@gmail.com.”

For now though, the buzz is strong when it comes to seven new tracks on the Honeybottle riddim. From Smooth’s “ Rude Wine,” to Nessa’s “ As Sexy as I Am,” Ejo’s “ Turn It Around,” Izac King’s “On Yuh” and Nikky’s “Rollin”- it’s safe to say, Carnival 2K11 is surely starting off on quite a sexy note- wouldn’t you say?

Find all music produced by Holy House Production at www.Trinidadtunes.com.