Christmas Begins With the Marionettes... and the bpTT Renegades! 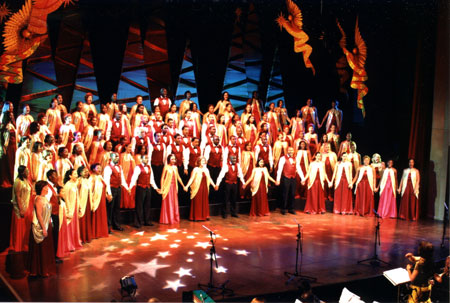 3 NOVEMBER, 2010 (PORT OF SPAIN, TRINIDAD & TOBAGO):- The beauty and bustle of the holiday season seems to start earlier and earlier each year, but some traditions remain true: Christmas begins with the Marionettes!

As always, audiences can look forward to the Chorale, under the expert direction of conductor Gretta Taylor, weaving the Yuletide theme through a mix of classical, spiritual, gospel, popular Christmas favourites, and local calypso and parang. This year the choir also reunites with old friends the bpTT Renegades.

The Christmas with the Marionettes concert series opens on Thursday 2nd December with a fundraising charity gala. The rest of the concert series runs Friday 3rd December through Sunday 5th December. In collaboration with sponsors bpTT, the group will also present its traditional special matinee on 4th December, a free performance for senior citizens and children from various institutions across the island.

The Chorale’s two holiday CDs – A Christmas Album (which features earlier collaborations with the Renegades) and Sing Noel – will also be on sale during the concert, and the full albums and individual tracks are available online at iTunes, CDBaby.com and TrinidadTunes.com.

ABOUT THE MARIONETTES:
Founded in 1964, incorporated as a nonprofit in 2005, and sponsored by bpTT since 1972, the Marionettes Chorale (Hummingbird Medal Gold) is one of the Caribbean's most celebrated choirs, both at home and abroad. In 1995, the Youth Chorale was formed, comprised of boys and girls from over 30 schools throughout Trinidad & Tobago who regularly share the stage with their senior counterparts. Led since 1974 by conductor Gretta Taylor, assistant musical director Susan Dore and secretary and founder member Joanne Mendes, the choirs mount at least two major productions a year, showcasing a repertoire ranging from European Renaissance to Caribbean Folk and Calypso. Web: http://www.marionetteschorale.com