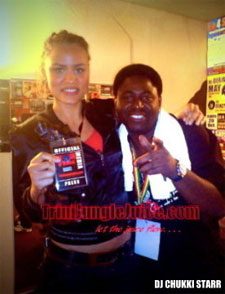 However the clock is already setting winter time across the ocean, the special programming of this November 2007 should definitely increase the local temperature straight up, by bringing together all the necessary ingredients for a wicked session!

Starting this week with two Jamaican artists: charismatic Alpheus and the UK-based Dj Chukki Starr who were the first to make their entrance under general excitement: the tone is officially set!

TriniJungleJuice was in the place and met the artists who see it as a real pleasure to perform in a country, where people are so much into Caribbean culture and especially into Caribbean music.

France is now awaiting the massive reggae/dancehall phenomenon straight from Guadeloupe: mister Admiral T, whose concert is highly expected for next week. Tickets are already announced to be all sold out!