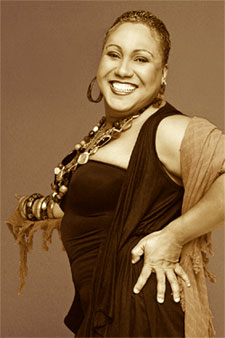 Soca is more than a hustle for one of T&T’s leading entertainment professionals. For Denise Belfon, known by her sobriquet, Saucy Wow- music is a craft that deserves continued attention, that the best end result can be achieved.

For the past two years, she’s laid somewhat low, having done only collaborations with artistes she respects in the industry. In 2011 however, Denise Belfon re-emerges hotter, lyrically stronger and fresher than ever before. Her matured seduction promises to entice, and her music promises to lure patrons, and with an aim to shake things up musically, she plunges forward, first with “Dance And Dingolay.”

Alongside fellow entertainers, Blaax, Swappi and even Swappi’s brother, the group 645 among others, Saucy on her first release ahead of Carnival 2011, rides the Swahili riddim, produced by Andrew Phillip and Shac De Burg and mastered by ‘Mice’ at Champion Sounds Studio. The track, she says, is powerful, with an African vibe that injects a call to stand up, revel in the mas, the music, the thrill that is T&T’s carnival. Written by Belfon herself and Jason Bishop- aka Shaft, Denise says “Dance and Dingolay” took her back to her roots of Best Village where her home of Point Cumana became a fond memory. “It’s really a different vibe and I think this is a great first release heading in C2K11, considering what’s still to come,” she said.

During her two-year semi-hiatus, Denise Belfon says she felt her fans’ yearning and decided that the time had come, this year, to execute stronger than she had before. “I’m doing these projects for my fans to feel happy again- Carnival misses me,” she said.

Beyond this first release, Belfon- on an even more serious note, indicated that she thinks Carnival needs more activity for the children of T&T. “I’m launching Poise on January 11th,” she hinted, explaining that the children’s mas band was created by her 9-year-old daughter Cassandra. The launch of Poise takes place on the Greens at the Queen’s Park Oval and will see the emergence of many bright, new, young faces. “My aim is to offer children their own place in carnival, complete with their own music, mas, steelpan, everything.”

On her involvement musically, with the band Poise, Denise says her track, “More Love,” will consciously strike the right chord with the kids, and will be used as the band’s theme song.

For Denise Belfon, being an entertainer means more than bright lights and stage performances. It also means being able to lend support to those in need and help foster awareness via that celebrity. “I work with the Princess Elizabeth Centre in Woodbrook and I’m doing a benefit dinner and dance on December 12th at the Oval Ballroom for them, with all proceeds going toward the centre’s development. The venue was originally the Hyatt, but we were forced to change the venue.

Entertainment will be provided by Roy Cape and Blaxx, Kenny J, H2OPhlo, Baron, Alison Hinds and Trini Barbie and there will also be a Fashion Show, executed by San Fernando based Du Rante Designs. “I would like people to come out and support for the benefit of the children in need,” said the singer.

Amid these projects and countless others, Denise Belfon promises to give only her best. In an industry that is often highly critical, she assures that no matter what, her music and the things she becomes involved in, will always be a reflection of hard work and ambitious goals.