One on One with Alpheus

Alpheus: "Everything for a reason" 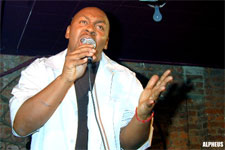 Born and raised in London, England, Jamaican reggae artist Alpheus developped a strong passion for singing after seeing Sam Cooke perform on television.With such musical influences as Dennis Brown, Michael Gordon and Thriller U, he finally became active in the London reggae scene in the late 80’s. Later Alpheus migrated to the United States where his career literally took off : he released a first album entitled "Quality Time" in association with the legendary Studio One and collaborated with artists like Michael Rose, Everton Blender, Sugar Minott and Richie Spice. "Everything for a reason" is his second album produced by the french label Special Delivery: "it’s everyday vibes. Everyday statement." Trini Jungle Juice went backstage to meet the artist on tour in France...

TJJ: Alpheus, I know it’s not your first time here in France: so what makes you basically come back? What is it that you like so much about this country?
Alpheus: Well, we know that at the moment the vibes in France are really good for reggae, and not just France, but Europe and especially the world, but right now Europe is going on groove. And you know I’m working with a label called Special Delivery and we just have an album coming out. So I’m here to work it and give the people the vibes!

TJJ: And what is so different with the french scene compared to the Caribbean?
Alpheus: Well, the difference is the culture, because obviously the home for reggae is Jamaica and then we have a place like France where there’s a lot of love for the culture, so they emulate it in a different way..

TJJ: In a different way? What do you mean?
Alpheus: In a different way, because they are learning It and I think reggae is a very stimulating music because it has History, it’s different riddims with different names and there’re different recuts of riddims and this is a stimulation and I think it stimulates the people in Europe, especially the french people because they are really into the reggae and i’m glad, i’m glad, i’m glad for all the people listening to real positive vibes!

TJJ: So basically you like the french audience?
Alpheus: Yeah man!! the vibes are there!! it’s good! It’s good!!

TJJ: Are there any artists in particular from the french West Indies you would like to collaborate with?
Alpheus: Yes, it’s easy: ADMIRAL T! Because this guy on the stage..I saw this guy on the stage and I think he sang in Bercy, in Paris, and damn this guy was electric! I don’t know what he’s saying, I don’t understand.. but this guy, he comes out there and keeps it going : changes hands..

TJJ: You mean he has real presence on stage?
Alpheus: Yeah man!! This guy, I wanna work with this guy! He got it! He got it! So Admiral T, but there many good artists from there.

TJJ: So you mean, reggae music is a positive music?
Alpheus: What?! But hey, straight up! But music IS positive: good music is positive. It doesn’t matter what genre, you know: rock , hip hop, whatever, zouk, whatever it is, as long as it’s positive, it’s correct.

TJJ: Now do you have a last word for all our TJJ addicts?
Alpheus: The Trinis? Well, listen man, nuff respect to all of you there: the beaches are great, I haven’t been there yet, but I want to come there! Big up all the great artists coming out of there: Jamelody, Queen Omega, big up everybody and all the upcoming artists!! But you’ve got the sunshine, so you don’t need nothing really, nuff respect!!