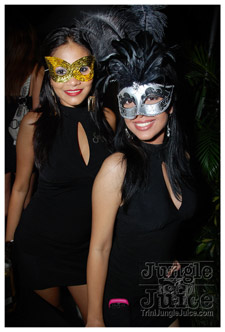 CROWD:
NO MASK NO ENTRY!!! That's the standard policy at any Eyes Wide Shut installment. TJJ touched down near the stroke of midnight and was warmly escorted inside. Now we know trinis like to party late, but make no joke ... when we stepped inside this fete, the whole place was literally packed already. Everyone dressed according to theme and oh, we must make mention ... the women looked extremely stunning and sexy tonight! Even Minister Mr. Roberts was spotted up in the dance. Our only complaint  ... the venue could have been bigger given the numbers that attended.

VENUE/ACCESSIBILITY:
Initially the party was advertised as being in Zen, but coming closer to event date it was moved to Olives. Now Olives is no stranger to hosting EWS. In the years 2002, 2004 & 2005 tHe CoMmIsSiOn also used this venue as the party's stomping grounds. The place was generally well decorated and laid out. The place was equip with sufficient bars and a hugely constructed outdoor dancefloor, which made patrons feel like they were in a club like atmosphere, with fancy light work trimmings and all. There was also a responsive clean up crew on the prowl, making sure cleanliness was always top priority. Coming back to the issue of the venue being too small ... they could have definitely set up some huge fans to help cool the place and circulate the air. The humidity was overwhelming! 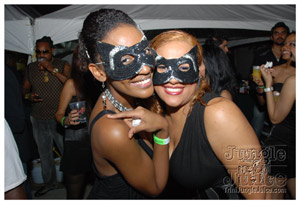 Lots of energy and excitement! We tend to believe in the notion that "alcohol helps warm up the crowd", and with the amount of alcohol here tonight, you could bet the  crowd was warm. Folks were happy and the vibes level seemed high. The outdoor dancefloor also really served its purpose, as folks danced all night long on it to the good music played by the DJs. Mush & High Fidelity/Less than Zero ... well done! Not forgetting Joy Juice who came in on the latter shift, and blessed the dance with the retro session as always.

This party was a drinks inclusive event. Now there were two main bars at either end of the nicely constructed outdoor dancefloor offering premium liquor to your heart's content. On the other two sides of the dancefloor were an Angostura cocktails booth and an Alize snowcones booth. We definitely recommended those snowcones as a great weapon in the battle against the terrifying heat :-) Ohh and not forgetting ... there was also a Champagne booth which caught the attention of many a patron. Folks were strolling around the party sipping out of their flute glasses ... ha ha. 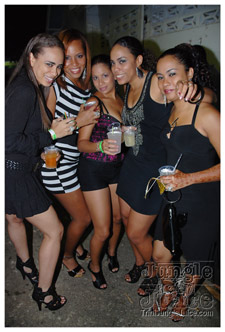 SERVICE:
Service was good. At the bars, they seemed pleasant and efficient. At the door, entry and re-entry seem to flow smoothly.

Special thanks to Stephen and Matthew as always for having TJJ most definitely present. Happy 10th Anniversary Eyes Wide Shut!