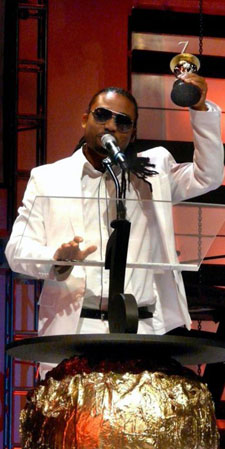 Port-Of-Spain, Trinidad (Sonique Solutions) – The celebrated ceremony which is considered to be the Grammy Awards of Caribbean and World music is coming to Trinidad and Tobago in May 2011. The producers of the event and telecommunications powerhouse Bmobile (which has signed on as a sponsor) are promising a prestigious show of epic proportions.

At a recent launch function organized by Bmobile at the TSTT Corporate Box in the Queen’s Park Oval, it was revealed to members of the media and specially invited guests that the 30th edition of The International Reggae And World Music Awards (IRAWMA) is carded to take place at the National Academy for Performing Arts in Port-Of-Spain on May 28th 2011.

IRAWMA, which has been produced by Martin’s International & Associates since1982, acknowledges and honours the accomplishments and contributions of Caribbean and World Music artistes including: songwriters, performers, promoters and musicians. The event has been held in many cities including; Atlanta, Chicago, Fort Lauderdale, Miami, New Orleans, New York, Ocho Rios and Montego Bay in Jamaica and will be hosted in T&T for the first time next year.

Mr. Ephraim Martin – Founder and Chairman of IRAWMA stated that Trinidad and Tobago has always been a place of choice to host the awards since 1986. It was noted that 30 countries put in a bid to host the event in 2011 and after a process of elimination and the encouragement of famed US designer Bruce Williams and music icons Calypso Rose and The Mighty Sparrow, the decision was made for Trinidad to host the esteemed extravaganza.

Mr. Martin explained that his organization plans to start branding Trinidad and Tobago as the home of the 30th International Reggae and World Music Awards and as a top destination for travel. He disclosed that for next year’s event local artistes will be on the performance bill and a new Chutney category will be introduced as well.

The Chicago based entrepreneur also shared, “We are very pleased to have Bmobile on board. Partnering with the number 1 mobile provider in the Caribbean is indeed a blessing”.

Donavan A. Neita – Vice President of Martin’s International & Associates echoed Mr. Martin’s sentiments when he added, “We could not ask for a stronger branding partner because they (Bmobile) are really committed to T&T and to Caribbean culture.

At the launch, Rhonda-Lee Yhapp from TSTT’s Communications department anticipated that this major upcoming event will bring a gathering of stars. She offered this statement, “Bmobile is sponsoring the event and is committed to making the 30th International Reggae and World Music Awards the most successful ever”.

She further declared: “If it is good for Trinidad and Tobago, then we must make it happen”.

Travel packages are already in the works for interested individuals from all over the world to come to T&T for the event. Thus far persons from the US, Canada, UK and other parts of Europe are expected to attend.