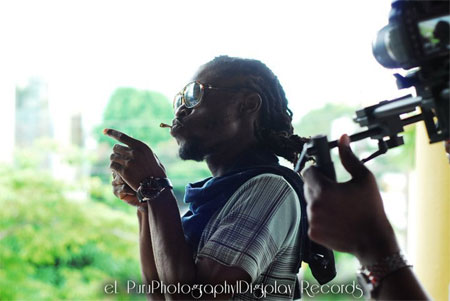 Billboard Artiste Erup recently shot a video for his latest hit single "Pop the Bottle". A song which many expect to cross over into the American Market. the song has already been creating waves in the USA, as it currently holds the #2 Spot on HOT97 Boston's Dancehall Chart and #5 on their Pop Chart. The Video Was shot at several locations across Kingston, Jamaica by a U.S Based Production Team called M1Sounds. The Directors of the video believes that this video will be of a high calibre and might even be nominated as Video Of the Year. The Video is set to Premier on Several TV Stations such as BET, MTV & FUSE networks. This is not only a great way to end 2010 for the harbour view based artiste but also a step in the right direction towards 2011. His Single "Pop the Bottle" was Produced by DIGIPLAY RECORDS on the ICE RIDDIM which also features other artistes such as Munga, Macka Diamond, Charly Black, Aisha Davis, Kym and Many more. We all anxiously await the release of the highly anticipated Video "Pop the Bottle" by ERUP.

Link to the song on TJJ TV: http://www.trinijunglejuice.com/tjjtv/erup/pop-the-bottle-video_b86641064.html