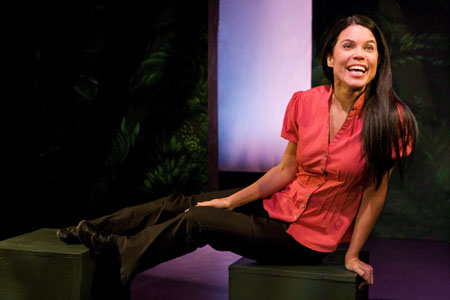 “The response has been phenomenal. Every patron who has seen it has responded with excitement...”

December 1, 2010 Kingston Jamaica:- With the success of its three week run in Kingston at the Theatre Place, Jamaica, Farewell will now move to Manchester and Montego Bay to complete its run in Jamaica. The play, which is the brainchild of playwright and actor Debra Ehnhardt, had 15 shows in Kingston between November 10 and November 28. Now, the show moves to Manchester for one show only at the Cecil Charlton Auditorium on Friday December 3. The show will then make its curtain call in Montego Bay on Saturday December 4 and Sunday December 5 at the Fairfield Theatre.

Overwhelmed by the reception of the play in Jamaica, Paul Goldson of Bamboo Grove

Productions explained: “The response has been phenomenal. Every patron who has seen it has responded with excitement and appreciation that we could bring such a gripping story to the stage. We appreciate all the persons who have supported us and are especially looking forward to the shows in Manchester and St. James”

Jamaica, Farewell, the 90-minute one woman autobiographical show, speaks to Ehrhardt's journey to the USA from Jamaica in the turbulent 1970s. The play illustrates the touching story of a young woman who yearns for better opportunities and a chance at living her dreams in the land of Hot Dogs and Hamburgers. The gripping yet sometimes funny play takes the audience through a roller-coaster ride of suspense, intrigue, thrills and excitement.

With successful runs in London, Toronto, New York, Los Angeles, Florida, Washington DC, Atlanta, Mexico, Bermuda and Kingston, Ehnhardt is pleased with the success of the play in her home country and is also happy that she will get the chance to take the play to Mandeville and Montego Bay: “I am very excited. I was a little nervous about bringing a play here about leaving Jamaica but it’s a honest story and I went deep down to bring it to the stage. I did not leave Jamaica because I did not love it here, but from I was a little girl my dream was to go the United States and now that I have lived that dream I am dying to return home. The reception has been excellent and I am happy that the audience has understood the journey and is willing to take it with me, even if it’s only for 90 minutes.”

Jamaica, Farewell hits Mandeville for one show only at the Cecil Charlton Auditorium on Friday December 3. The one-woman play will then close off its one month run with two shows in Montego Bay on Saturday December 4 and Sunday December 5 at the Fairfield Theatre.

Ehrhardt was also a 2007 NYC Fringe Festival award-winner and is a member of the Writer’s Guild of America. For more information, please visit www.jamaicafarewelltheplay.com

In January of 2010, Rita Wilson-Hanks, producer of My Big Fat Greek Wedding, optioned the movie rights to Jamaica, Farewell with a full US tour of the play to open Spring 2011.

Bamboo Grove Productions presents Debra Ehrhardt’s JAMAICA, FAREWELL, Wednesday, November 10 through Sunday December 5. Tickets for JAMAICA, FAREWELL are J$1500.00 and can be reserved online at www.bamboogroveproductions.com or via telephone 876-584-7230