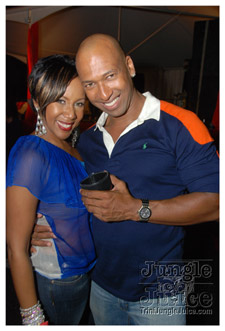 CROWD:
We were already familiar with the party and the caliber of crowd it carried, but this year the abundance of women was even greater. Not only were they sexy, but they were everywhere! You can't go wrong with such a situation. The party is also quite a large one, with a crowd numbering in the hundreds.

VENUE/ACCESSIBILITY:
The party was held at the same location as last year, so finding it was no problem this time around. When it came to parking, patrons were directed to designated areas on the outskirts, after which they were then picked up and speedily shuttled up to the party. On the inside there was a large main stage constructed up front for the night's live entertainment, food & drink bars along the two sides and ample promotion booths spread out near the main entrance. The only main concern on the night was the threat of rain, which had been pestering all day. God must really be a Trini ...  because not a drop fell :-)

VIBES:
We told you people ... last year was TJJ's first experience, but definitely not our last! Yup another year has passed and we back up in it again ... Gruff's Parang Party! Now what is a parang party without some parang??!! A live performance from Marcia Miranda soon solved that issue. Later on in the night Kes the Band also performed, taking the entertainment level one notch higher. Folks generally seemed happy and looked like they were surely enjoying themselves. We gathered this much from their pleasant smiles, constant dancing and friendly interaction or was it all because of the unlimited alcohol ... lol. Either way, everyone that came out had themselves a time!

SERVICE:
The service provided was on point from start to finish. The following factors were responsible for this: 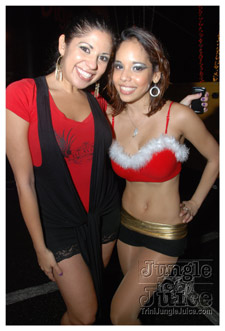 COST/VALUE:
The price went from $295 to a mere $325 this year. Barely any increase, especially with all that was offered. Definitely money well spent!

FOOD/DRINKS:
This was a Food & Drinks Inclusive affair, so that everything you wanted was readily available to you. The bar carried a premium line up of alcohol (including Mr. Johnnie Walker) and also served all drinks with a sense of class and sophistication. Yes people ... believe it or not, every single drink was served in a glass! Also for those who liked cocktails, there was the Martini Makers booth, and for the shots people ... you could have gotten your dosage of either the Jose Cuevo tequila or Jägermeister cold shots. Now when it came to food, there was quite a variety and an unlimited supply as well. Corn soup, hops & ham, paleau and gyros being some of the tasty selections. Did we mention ... everything was Free!