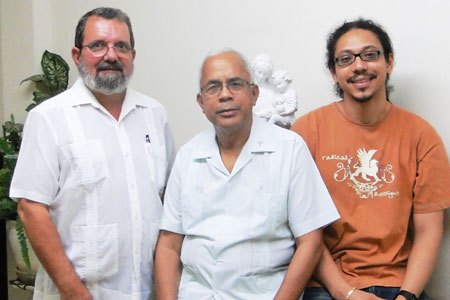 POS, Trinidad (Sonique Solutions) – Famed Port-Of-Spain secondary school Saint Mary’s College, more popularly known as CIC, (College of the Immaculate Conception) will be celebrating its 150th anniversary in 2012. In commemoration of this auspicious occasion Forward Ever Films will be producing the documentary entitled “St. Mary's College: 150 years of National Service”.

This one of a kind film venture will be written, directed and produced by Christopher Din Chong (for Forward Ever Films). This idea was conceived during a conversation between Din Chong and former St. Mary’s College Principal, Fr. Anton Dick at the 2010 edition of the annual ‘Dining with the Saints’ function.

Din Chong, a past pupil of CIC, was immediately sold on the idea and has absorbed the initial production costs of this project. His colleague Mikkell Khan of Diamond Films will be handling the post production of this film which will also be marketed through their company Create Strategies Ltd. He explained, “This film is going to be an historical document. So the contribution of both past and present students will be recorded and archived for posterity. The priceless stories and advice from these men will be available for the benefit of future generations”. He added, “It will be a 75 minute feature length documentary that will be entered into a number of prestigious film festivals, shown on television and eventually made available for purchase on DVD”.

Din Chong also offered this statement, “St. Mary's College: 150 years of National Service will explore the contribution of St. Mary’s College to the nation of Trinidad and Tobago and the reasons why this institution remains the most esteemed college in the region. The institution will be showcased as the driving force that propelled timid boys into dynamic young men armed with the resources necessary to compete and succeed on the world stage in any discipline”.

Many of the alumni have achieved great success in the fields of politics, business, law, and medicine. The College has produced the country's first local Governor (Sir Solomon Hochoy), first President (Sir Ellis Clarke), first President of the Senate (J. Hamilton Maurice) and many former and current Members of Parliament. In the religious sphere, another notable alumnus, Archbishop Anthony Pantin had the distinction of becoming the first local Catholic Archbishop of Port-Of-Spain.

When asked about this effort Fr. Dick shared, “I welcome the initiative most heartily and judge it most appropriate to highlight the service that the institution which is St. Mary's College has provided to the national community, and indeed to the world, primarily through its alumni. Both CIC and T&T stand to gain by the review of the 150 years of the college's existence since it will show the history and progress of an institution from colonial times, through the turbulence of seeking self-government and independence, and the subsequent adapting to the era of post-independence which is still taking place”.

Regarding Din Chong’s undertaking the task of this documentary, he stated, “I am excited that Chris is undertaking such an initiative with gusto. He seems to have his finger on the pulse of what is required and has proven that his company is capable of producing quality work. I support the enterprise fully and have promised to assist in every way I can”.

Current CIC principal Fr. Mendes stated, “As the oldest continuously existing denominational boys secondary school in the country, the history of the college is an integral part of the history of the nation. This project will engender pride, not only among the past students of the school but more importantly among the present students. It will exhibit that by assimilating and living out the two-fold motto of C.I.C., ‘Manliness and Knowledge’, our present students can join the ‘glorious throng’ in contributing to the development of their fellow man, of our church and of our nation”.

He also said, “I think that this is a very original and creative venture on the part of Christopher and his company. I am proud of him and grateful for his contributing to his Alma Mater in this fashion”.

All CIC alumni and interested persons who wish to support this project are encouraged to contact Forward Ever Films at 221-0840 or members of the Saint Mary’s Past Students’ Union.