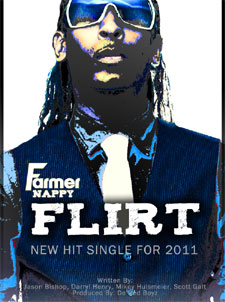 Coming off tour with the Largest Soca Act in the world: Machel Montano & The HD Family, Farmer Nappy is rested, re-charged and ready for the upcoming Carnival 2011 Season. Farmer begins his 2011 journey with enthusiasm and anticipation. He was mostly recognized for his sweet groove songs and collaborations in the past, but for Carnival 2010 he decided to change up his strategy and up his game by bringing out more than one song and testing the waters in the up-tempo soca category. With the absence of Machel Montano last Carnival, Farmer stood up to the critics and proved them wrong. While performing his 2010 Carnival Hits ‘Looking to Wine’, ‘Pavement’ and ‘I Pay For This’, Farmer & the HD Family flew the HD Flag successfully. With the versatility to perform both groovy and up-tempo soca and entrusting his music into the hands of some of the most recognized producers in the industry, Farmer Nappy is destined to have another successful year ahead. This year, Farmer will be releasing three songs, one groovy and two up-tempo.

For Carnival 2011, Farmer’s first song, scheduled for release on Wednesday 1, December 2010 is a Red Boyz Production called “FLIRT!” The song was written by Trinidadian writer Jason "Shaft" Bishop, as well as Darryl Henry, Mikey Hulsmeier & Scott Galt. De Red Boyz are highly regarded as one of the best groovy Producers in the industry. They produced soca hits such as, ‘Chippin’ (With Meh Own Woman), ‘Nah Going Home’ (Groovy Monarch 2007), ‘Woman By My Side,’ ‘Make It Yours’ (Shurwayne Winchester ft. Maxi Priest) as well as countless others. As producers, they are also known for working with Internationally signed artistes’ Maxi Priest, UB40, Shontelle, Livi Franc and Kevin Lyttle to name a few. Their last album made it all the way to the Billboard Reggae Album Charts.

FLIRT is a playful song which adds yet another word to ‘what we west Indians do in a fete’. We drink, we lime, we wine, & have a good time. We may also do things that lead to something else, but in this case, we’ll just FLIRT!

To Flirt: 1. To behave amorously without serious intent. 2. To show casual interest in. 3. To come close to. With this song, Farmer is without a doubt giving both men and women either the option or the excuse, to FLIRT! Women in general are well known at perfecting the art of ‘Flirting.’ However, Farmer is flipping the script for the men with key lyric lines, such as: “The only thing you could make me take off tonight is meh shirt,” “Yuh nah make me guilty,” “We not asking for no relationship” & “No strings attached, ah goh wine on dat.” Farmer is sure to intrigue and encourage harmless and maybe, not so harmless ‘Flirting’ during the upcoming wining season!

Farmer’s second release will be one of two up-tempo songs for the Carnival 2011 season. Set to release during the second week of December, “Is Ah Must,” is written by Jason “Shaft” Bishop, Darryl Henry, and Kernal Roberts and also produced by Kernal Roberts. This song is expected to instigate a vigorous wining frenzy! Kernal, is well known for his immense talents as a songwriter/ producer with tremendous soca hits under his belt to date. He was awarded Soca Producer of the Year at the 2010 International Soca Awards and his musical works have won countless awards through out the years, as well as Road Marches and Soca Monarch. Although Farmer & Kernal are band mates, this is the first time that Farmer is working with Kernal in this capacity and he is looking forward to the song’s reception.

After Farmer’s success last Carnival with his Mega Hit ‘Pavement’ & ‘I Pay For This’ both co-written and produced by Kerwin Du Bois, the two are at it again! Last, but not least, Du Bois may be ‘small’, but he has proven to be ‘mighty’ with his immense talents. His multi-tasking has brought him success in all facets of the soca music industry, as he fills the shoes of award winning Songwriter, Producer and Artiste with many accolades to date! After last year’s success, everyone is wondering what the duo has to offer this year! Straight out of the KNS Studio in Toronto, written by both Farmer & Du Bois, due to be released the first week of January, it is fair to say that the people and the streets of Trinidad & Tobago need to be prepared for a “SHUT DOWN!” Another mega carnival hit is in the making and with out giving too much information away, you have been warned!