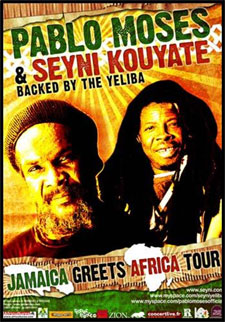 Kamau Brathwaite (b. 1930), leading Caribbean poet and scholar from Barbados has once described Caribbean speech as ‘Nation language’: a term of use, that can easily be adjusted when it comes to evoke the engaging live show that took place on November 29, 2007, right in the city of Bordeaux (France).

From the very beginning, the show was placed under the sign of a meaningful encounter between Jamaica and Africa, each represented by their respective spokesmen for the occasion: reggae veteran artist Pablo Moses and Guinean independence militant Seyni Kouyate. Both singers have demonstrated with their natural warmth how to let a ‘Nation language’ speak out to turn into ’Universal demands’ uprising from the rich embracement of two musical genres having fundamentally the same root, the same communicative rhythm speech.

Back from his tour in Africa, Pablo Moses would probably define himself the show as an invitation to reverse all prejudices with highly claimed concerns of freedom, unity, humanity, self-affirmation, global environmental accountability and the least we can say is that the message has been greeted with overall awareness.

Spanning the historical as well as the present, the Afro-Caribbean beat simply made a groovy  difference...