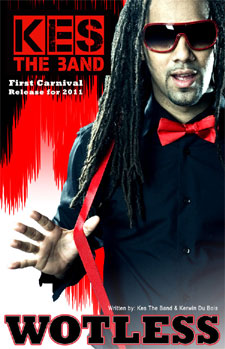 Following their energetic and unforgettable Carnival performances of 2010, Kes the band toured all throughout the year hitting territories such as Toronto, Jamaica, London, Miami, Los Angeles and even traveled to China for three incredible performances! During the summer the band released two mega hits "RED LIGHT" and "LET ME KNOW" and in the month of November "Casanova" all three tracks are in the pop vein and will be on their upcoming album STEREOTYPE.

"Let Me Know" was picked up for the Inflight Entertainment program on American Airlines and also to be part of all SIX FLAGS music networks played in the parks throughout the USA.

The band continue to show their diversity with their range of new songs and will be opening for Maroon 5 in December 2010. This will not only end off their year on a huge note but ring in Carnival 2011 with a bang!

Teaming up with the super talented Kerwin Du Bois and after a lot of anticipation from fans the band releases their first carnival tune for the upcoming season - "WOTLESS". Its all about being.... well...... WOTLESS! Look out for more major releases from the band for the 2011 season!