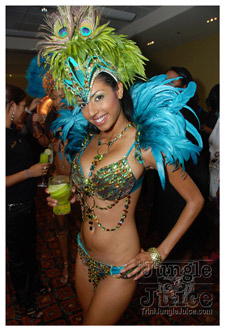 So folks Hyatt in collaboration with Pollen Nation Events, a New York/Trinidad based company have decided to throw what we hear is going to be one of the HOTTEST events this carnival. YES! WE FETE’IN IN D HYATT COME CARNIVAL WEDSNESDAY!!!

This will be Hyatt Regency’s FIRST carnival fete called LIME on Wednesday March 2nd, 2011. It will be an ALL-INCLUSIVE fete...so yuh dun know we eating and drinking WHOLE NIGHT! Now we all know Hyatt’s reputation for BESS food and they have promised us there will be exquisite cuisines prepared by expert chefs to TEASE and SATISFY us all. As for the drinks... if the media launch was anything to go by you’ll going to be in for some nice treats that might just have you legless by the end of the night *wink*wink*.

Two drinks in particular were launched “Forbidden Lime” and “Lime Time”. Forbidden Lime is a mixture with Patron and some other secret ingredients we won’t expose let you experience it for yuhself, I took one sip and was good... Tequila and I are not friends lol. Lime Time was more my speed, with the main alcohol being 1919 rum. Both mixtures had freshly squeezed lime and I thought I was drinking juice to be honest before I know it I had hmmm a few well under my belt :-)

You can also look forward to entertainment by the likes of Kees the Band featuring Nadia Batson, Karma and David Rudder and Charlie’s Roots to name a few.

Collin Abraham, head guy of Pollen Nation Events has returned to his home island to change the experience you get from an event... giving us the ULTIMATE LIME! The decor for this fete should be an interesting eye pleaser. My boy has ah clientele list that when I call one name I don’t even need to list the rest lol. Events he has planned; Jay-Z and Beyonce’s wedding, the inauguration of President Barack Obama and yuh aint hear what I just say... OBAMA!! Well I sure we don’t need to continue the list.

I don’t know guys... already I thinking this fete sounding like ah ‘CYAH MISS DIS’ kinda fete. Before I forget, I so excited I think I still have some of that ‘Lime Time’ in meh system ;-) Tickets for LIME go on sale on January 1st 2011 and will ONLY be available online at www.ultimatelime.com. SCALPERS hard luck they really trying to keep allyuh out... apparently you do not get a physical ticket either... not too sure the mechanics.

On that note... we ting tinging in the Hyatt come carnival Wednesday??? Who knows, we’ll see... stay tuned.