By Tuere aka Teekay
Published on 04-Dec-10
The lineup of the Evolution of Sound concert was a Reggae lover’s dream, Nas and Jr. Gong on their Distant Relatives world tour and Jah Cure. Oh and hip-hop enthusiasts weren’t left out either of course. It was set to be a night of quality entertainment and we weren’t disappointed. The local opening acts that we ...
>> View Evolution Of Sound Gallery 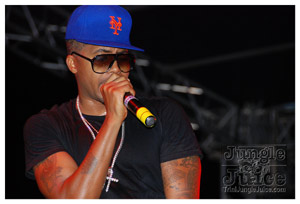 The lineup of the Evolution of Sound concert was a Reggae lover’s dream, Nas and Jr. Gong on their Distant Relatives world tour and Jah Cure. Oh and hip-hop enthusiasts weren’t left out either of course. It was set to be a night of quality entertainment and we weren’t disappointed. The local opening acts that we caught included Sef Gaines who brought a taste of local hip hop with a performance dedicated to fallen soldier Edson Phipps R.I.P. The Millionaire Family then livened things up with their string of Soca and dancehall hits. This gave the crowd the opportunity to warm up while they sampled with what our local talent has to offer.

In terms of layout and logistics everything went smoothly for us and we must give props to the promoters for that. The various sections were laid out just as they were in the press so there were no irate patrons cussing about misrepresentation. The VVIP section, which included free premium drinks and finger food, had conveniently located bars and food areas. There was an impressive number of bar staff so there was never need to wait for a drink. The sections were spacious so we were able to get some drinks, build a vibe and enjoy the bess performances in comfort. What more could we ask for? 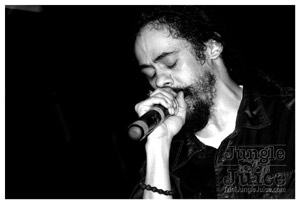 The main acts took the stage shortly after midnight and delivered what we came for. Nas sent his hip-hop heads wild when he performed some of his biggest hits including One Mic. Jr. Gong also sang a selection from his repertoire that had us girls reminiscing of when he was the biggest teen heartthrob. They combined forces on their Distant Relatives songs and sang most of the album, impressively sounding just like the recorded version. They were presented with special awards of recognition for their contribution to music and seemed very humbled by and appreciative of the gesture. They then took the stage once again for an encore that brought their part of the show to a climactic end. One thing about Jr. Gong’s performance that has been consistent over the years is the energy level. The flag man and back up singers gave their all as we’ve come to expect and look forward to seeing them to do.

There was a short DJ set between main acts while those patrons who were waiting to see Jah Cure got a chance to get something to eat and rehydrate after singing along to Gong and Nas. When Cure took the stage it was time for screaming girls and lovers to be treated. His voice was smooth as ever as he belted out his Reggae ballads. Phyllisia Ross joined him on stage for their duet Unconditional Love after which he was also presented with an award. Even after returning to the stage for an encore he still left us wanting more but alas all good things must come to an end. We definitely left the concert on a high note and look forward to the 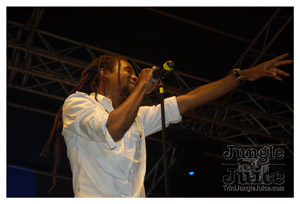 next time these artistes come to our shores.

Teekay for the TJJ Fam