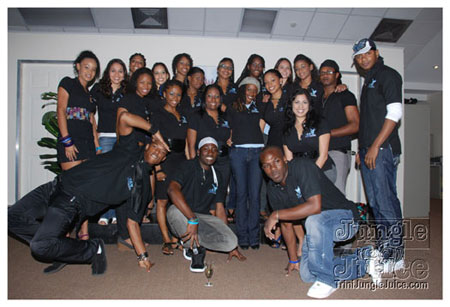 Elle NYTT, launched it’s new identity this Friday 10 December 2010 at the Trinidad and Tobago Entertainment Company, Long Circular Road. The company, formerly known as Elle Incorporated, recently started an exciting, new venture, expanding its domains beyond Trinidad and Tobago to New York, with this operation expected to be fully underway in June 2011.

You may have seen them on Synergy TV’s T&T Best Dance Crew or performing with Kes the Band or touring with Machel Montano HD, but Elle NYTT has even more in store for you. It presents its second production “Elle 7”, to be held at the NAPA auditorium in April 2011, promising to showcase the wide array of dance talent and styles.

New members have also been introduced this year. Look out for them in new projects and gigs including alongside the soca-latin sensation, Mr. Renzo (Laurenzo Gonzales).

As the company expands, it is no better time to introduce the new location at the corner of Knowles Street and Eckle’s Trace, Curepe. The top notch facilities will be housing the popular modern, hip-hop, folk, dancehall and latin classes as well as the recently introduced ballet classes and the ‘house wives keep-fit’ regime. Similar to the existing classes for children, there will be classes for those attending schools in the area, starting from the age of 6.

Elle NYTT takes pride in being very inclusive and inviting to the public, offering open classes which cater to all levels of experience. The members invite you to be a part of the continuing process to develop the dance industry in Trinidad and Tobago and to further market our Caribbean nation to the world.