By TJJ Admin
Published on 28-Dec-10
P.O.S, Trinidad. December 28, 2010 - With an ongoing commitment to the preservation and development of local talent, carnival promotional outfit, Tropix Entertainment will in 2011, celebrate and honour the work of one of the Caribbean’s most respected and ... 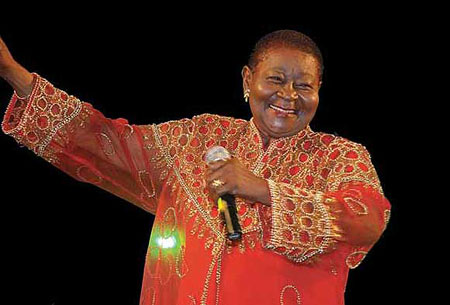 P.O.S, Trinidad. December 28, 2010 - With an ongoing commitment to the preservation and development of local talent, carnival promotional outfit, Tropix Entertainment will in 2011, celebrate and honour the work of one of the Caribbean’s most respected and prominent musical talents, Calypso Rose.

Tropix has been a forerunner in Carnival entertainment for over a decade. With events like Army Fete and Fire Fete just two off their extensive list of enjoyable carnival showcases and others like Brass Festival being memorable events of the past- the entity has certainly assisted in shaping much of what carnival revelers have grown accustomed to, and remember about T&T’s Carnival.

An event dubbed, “She is Carnival” will make its debut to the Carnival scene in 2011, courtesy Tropix Entertainment. According to organisers, the show will highlight not just female vocalists of the soca and calypso genres but it will delve deeper into the female fraternity of which Calypso Rose has been, and continues to be a leader. “We’ve acknowledged that this is a woman who bears numerous distinctions from every corner of the globe. She is ours and we as a people should really be proud of what she’s done for the music and for Trinidad and Tobago,” said the event’s promotional manager.

Calyspo Rose, real name Mc Cartha Lewis has been the undisputed Calypso Queen of the World for the past 40 years and continues to bear the honour. The Tobago born singer started off in the industry at the tender age of 15 and since that time, Calypso Rose has represented this country, donning the red, white and black with pride, across the region and the world. She’s credited for being the first woman to ever win the prestigious Calypso Monarch title and the coveted Road March title in T&T, in the year 1977. Prior to that, Rose who represents as the mother of all flowers, received the Medal of Merit from Trinidad and Tobago by order of the English Queen for her Gold Record, “Do Dem Back,” in 1975.

Tropix Entertainment will on February 11, 2011 honour this queen with full carnival accompaniment and detail at “She Is Carnival.” Amid the young stars of soca and even fellow female veterans of the industry, Calypso Rose who has over the years won Lifetime Achievement awards, been honoured as the Most Outstanding Woman in Trinidad and Tobago by the National Women’s Action Committee and who has even received the keys to the city of St. Catherine’s Ontario, Canada among countless other distinctions, will enjoy celebrated tribute in South, Trinidad.

The show is expected to be one of the most high quality productions in Carnival 2011 with a cast that includes, Destra Garcia, Denise Belfon, Singing Sandra, Drupatee, Fay-Ann Lyons, Nadia Batson, Patrice Roberts, Lil Bits, and Nisha B among others.

The highlight of it all will however be the embrace of, and homage that will be paid to Calypso Rose by Tropix Entertainment, for her worth to the nation and the culture, that she so proudly represents.