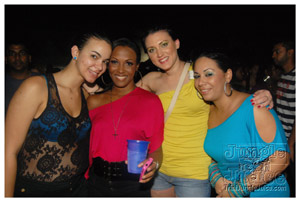 Funky Monkey Christmas Edition!!! The biggest cooler party for the season OMG!!! Four words describe this ultimate event .... Coolers, Babes, Music, and Vibes. One question before we start the journey, "Shane, oh lawd how do you get this combination?"

The first funky monkey TJJ had a blast so this one we really looked forward to. It's midnight and the party done in a gear. On entering, the stage was located directly in front to accommodate the massive crowd, the lights in the middle certainly brought out the ambience and the VIP on the left ... well it's a VIP, what do you expect ... bess!!! And last but not least ... my word, the ladies ... mmmm (we mission on target).  A cooler fete, with the four words as mentioned before, you know THIS IS THE LIME TO BE IN! Now we doing this ting for a good minute, so you know we always bouncing up all crew 'n crew anywhere we go. So far every cooler we pass, someone offered us a drink... from scotch, vodka, rum to the plain old government juice ... and my favourite (always in my back pocket) ... Appleton Rum. So we got to take an advantage of that. 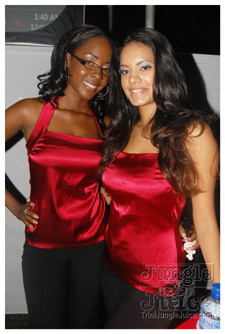 Performance wise ... some of the best artistes  passed thru, with JW and Blaze giving us a taste on the Coca Cola Riddim ("Together") and 2010 Road March hit "Palance". But the highlight of the night was Benjai wining to the side ("Wine To The Side"), but I guess in handcuffs though ... lol (okay, maybe not that funny)!!

We were on the move again through the crowd carrying out the mission of snapping and taking a small wine here and there.  Mission completed ... time to put away the cameras a little and enjoy the vibes... next thing is 5 am ... time to hit the highway. Who say Doubles??!!