POS, Trinidad (Sonique Solutions) – The Grammy Award winning, American music band Maroon 5 rocked the Hasely Crawford Stadium in Port-Of-Spain on December 30th with a mind blowing arsenal of chart-topping hits and new material of their latest album “Hands All Over”.

The concert spectacular which was sponsored by telecommunications company Bmobile marked the launch of the country’s latest radio station Star 947. The station boasts a dynamic Pop/Rock format and has gained a huge following as evidenced by the large capacity crowd in attendance. 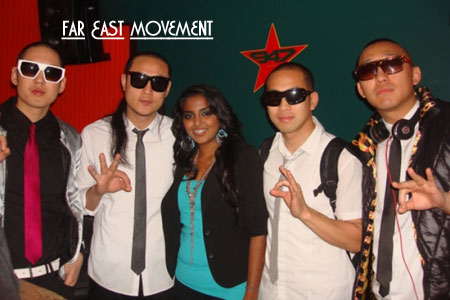 5 miles to Midnight who this year won the prestigious Anchorage Pop Music competition kicked off the evening’s entertainment with a high impact set of covers of popular songs and some original compositions. Lead vocalist Liam King truly connected with the younger members of the audience.

Kes the Band, complete with background dancers more than proved their ability to share the stage with internationally signed acts. Their energetic performance incorporated original fusion and crossover songs “Let Me Know”, “Red Light” and “Stalker” alongside Soca hits “Right Dey” and “Thunder”. Frontman Kees Dieffenthaller was joined onstage by his former Imij and Company band mate Michelle Xavier for a rendition of his Reggae ballad “Loving You”.

Kes was followed by the Far East Movement who literally had the entire crowd waving their green Bmobile glow sticks. The Asian hip-hop group which had energy akin to the Beastie Boys and Naughty by Nature and a lively sound similar to that of the Black Eyed Peas tore down the house with their hit singles such as “Like A G6” and “Rocketeer”. 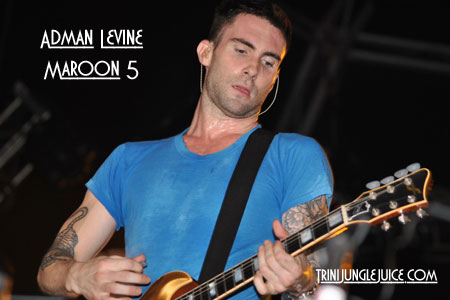 Headliners Maroon 5 certainly did not disappoint. Lead singer Adam Levine’s vocals resonated through the stadium as they churned out their highly anticipated repertoire which included “Harder to Breathe, “She Will Be Loved”, “If I Never See Your Face Again”, “Misery”. The dynamic multi-platinum selling band ended their set with what many consider to be their 3 biggest songs, “Sunday Morning”, “Makes Me Wonder” and “This Love”.

The show ended with a literal bang as the audience which included comediennes Penelope Spencer and Nikki Crosby, Soca artistes Zan, Kernal Roberts and Shurwayne Winchester and Yuma Bandleader Teri-Leigh Bovell stood in awe of the brilliant fireworks display.

Regarding this entire initiative, the event’s producer Anthony “Chinese Laundry” Chow Lin On said, “It has been amazing; we struck a nerve with the niche market we went after. Ever since I decided to go into the pop rock genre it’s been my intention to deliver the very best in the world thus we looked for a band which was currently on the charts and which represented the genre of pop/rock. Maroon 5 has the widest appeal for our diverse clientele. He further stated, “This is the start of a movement whereby we display the very best entertainment. We want to utilize this as a forum to expose local pop rock artistes such as Kes, 5 miles to midnight and Gyazette”.

When asked about Bmobile’s partnership for this venture Chow Lin On offered this statement, “Bmobile has always had a track record of support for the local entertainment industry and has supported us in the past. We are glad to have them on board for this launch project and welcome more opportunities for collaboration”.

Bmobile’s Marketing Manager Stacy Henderson who is a fan of Maroon 5 was on hand at the event and shared, “We at Bmobile always strive to support the local cultural and entertainment sector and take pride in being able to assist in bringing top class global acts to the shores of Trinidad and Tobago”.