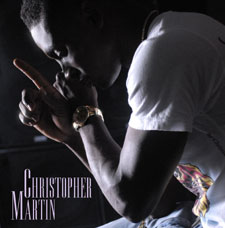 January 7, 2011 Kingston Jamaica:- Coming off his successful two month tour of Europe with Gentleman, reggae sensation Christopher Martin has just copped the award for Male Artiste of the Year (2010) in Kenya. The prize is a part of the Kingston 10 Reggae Awards which is in its 3rd Year.

The awards had 8 categories and the list of winners for 2010 include Cash Flow Records for Riddim of the Year, Pleasure Riddim, Alaine for Live Performance of the Year when she visited Sepetuka Kenya in July 2010 and Ce’Cile for Female Artist of the Year.

Over the past year Christopher Martin has been making inroads into the African market with hits such as Paper Loving, Exgirlfriend and As I Walk Away. Ce’Cile on the other hand, has also been doing well on Kenyan radio with songs such as Home Tonight, Cook Fi You and When You're Here With Me.

As if to celebrate their win, both Ce’Cile and Christopher Martin recently announced on Facebook that they will be visiting Nairobi's Premier venue The Carnivore on March 5 for one show only. Since the announcement social networks in Kenya have been buzzing with news of the upcoming show and tickets are already in high demand.

Christopher Martin, who has never been to Africa, recently confessed in an interview on Homeboyz 91.5FM Kenya that he is excited at the prospect of finally making the long trip across the Atlantic. He said: “I cannot even begin to describe how I feel about visiting Africa in March. I know that the fans there are dedicated to Jamaican music and I can’t wait to give them the performance they have been waiting for”

Christopher Martin has a busy year ahead and is currently in studio at Big Yard working on his first album for the Jamaican market which is expected to be released in the last quarter of this year.