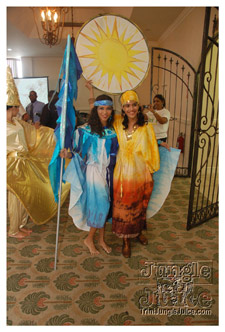 Values based fun is the mission The Word and Associates stand by with the launch of their 2011 Carnival Band Genesis 1 - Creation. An initiative designed to change the face of Carnival in Trinidad and Tobago in a refreshing way.  It is in keeping with a resolution to chart a new way forward for the church by actively promoting enculturation of faith in every area of Church life by finding meaningful ways of engaging culture on its own terms and in an effort to bring social cohesion to this aspect of our culture by creating an atmosphere of family. The Word and Associates Chairman Derek Walcott mentioned the church is at the head of the celebration in our neighboring Island of Antigua. Also the band would be crossing the stage of the Queens Park Savannah come Carnival Monday and Tuesday.

The initiative is fully supported by the Catholic Church with Monsignor Jason Gordon representing on behalf of His Grace Archbishop Edward Joseph Gilbert. The Word and Associates which is primarily made up of parishioners of St. Anthony’s RC Church in Petit Valley  have outlined their list of activities for the season which is to be the first of many with an all-inclusive fete on Sunday 20th February at Green Meadows, Santa Cruz with Dj Rene, Denise Plummer, Laventille Rhythm Section and more all at the price of $375.00 TT also a special at $300.00 TT before January 31st. Aiming for 1200 masqueraders The Word and Associates say all are welcome to celebrate creativity and have good clean fun with 12 section at 100 persons per section and a King and Queen. Registration can be made online and at the mas camp which is split into two locations - payment and distribution at Stevens Road, Long Circular, Maraval (obliquely opposite The Assumption Catholic Church and their production site located at Belmont. Costumes will range between $1,200.00 TT and $2,500.00 TT.

For more information on Genesis 1 - Creation you can find them at: