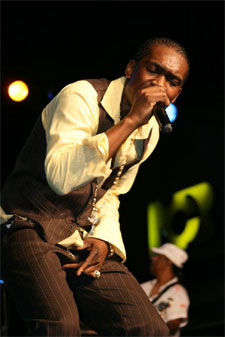 Jamaica’s most celebrated younger generation Dancehall artist, Busy Signal has taken the term ‘respect’ to an elite level with the cover of one of Beres Hammond’s most famous song “Tempted to Touch.”

Performed on the original riddim of the same name (produced by Donovan Germain of Penthouse Records), and with backing vocals by the King of Lover’s Rock himself, Busy Signal adds his hott-ed touch to this classic, causing both the much younger, and mature generations to appreciate the song all over again.

Using the same words as the original, Busy’s signature voice carries melodically over the riddim, as do his trademark vocal riffs; the annunciation of his name Busy, and the way he says ‘hott-ed.’ For the music consumer, Busy’s touch is the equivalent to taking a diamond that’s been hidden for several years, cleaning it, and letting it shine again!

“It’s an honor for me to work on this project, I admire Beres Hammond and all he has done over the years. He is an icon and represents what younger artists aspire to become” said Busy Signal

The feeling from Beres towards Busy is mutual as the two recorded a remix of the song “Fire and Ice”. Busy's cover of Tempted To Touch is the first single from the Penthouse project ‘Our Favourite Beres Hammond Songs’ which includes contributions from Marcia Griffiths, Jah Cure, Tarrus Riley, Duane Stephenson, Nadine Sutherland, Sherita, Nikki Burt and several others of Jamaica’s finest talents.

Busy will be releasing an album in the near future called “Busy For Lovers.” The project is a joint collaboration between Donovan Germain for Penthouse Records and Shane C. Brown of Jukeboxx Productions.