Millionaire Family Band To Be Unleashed At Fire Fete 2011 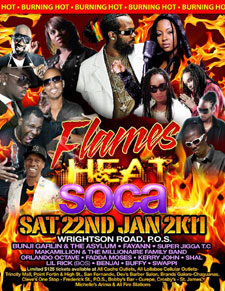 This year, the event, which is the first big fete to kick off Carnival 2011 in Trinidad and Tobago, is promising to inject the energy into patrons from early on. An unbeatable cast coupled with a venue that promises to work like magic, will offer Fire Fete faithfuls and new fete lovers alike, the perfect setting to have the time of their lives.

This year, the cast is made up of a number of big-tune entertainers, among them, Benjai, Lil Rick out of Barbados, Denise Saucy Wow Belfon, The Millionaire Family, The Boss Neil Iwer George, Super Jigga TC and Shal Marshal and not forgetting St. Vincent’s Road March King, Madzart!

According to organizers tickets have been kept reasonably priced to ensure that patrons still feel comfortable even amid the uncertain economic times. Already, one crew of entertainers has made a strong statement ahead of Fire Fete. Makamillion and the Millionaire Family have promised to present a unique presentation on show-night as they will launch their very own Millionaire Family Band on stage at Fire Fete. According to Makamillion, all systems are set for a show the likes of which Trinbagonians have never quite experienced before. “ The guys are working hard to pull it off and it will be done at Fire Fete!” said Makamillion.

The Millionaire family of Makamillion, Fadda Moses, Orlando Octave, Kerry John, producer Mr. Spine and JahMel have struck gold so far and there’s no doubt that Fire Fete will take them up yet another notch on the ladder of success. Meanwhile, ticket outlets are enjoying bustling sales for this carnival scorcher however, with just about one week before big fete night, organizers are calling on patrons to get their tickets in hand as it is speculated that there will be a rush for tickets at the gate on January 22nd.

This carnival, the vibe and energy are on point and with the heat of the first major event set to infiltrate very early in the season, there’s no doubt that the thrill of C2K11 will be prompted by Fire Fete 2011- Flames, Heat and Soca!