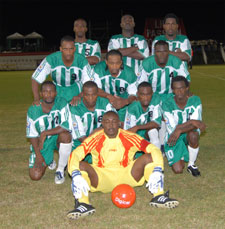 Monday, September 29 - Basseterre, St. Kitts:   Head coach of the British Virgin Islands (BVI) National team, Avondale Williams, accepts that they have lost but they were not disgraced following their exit from the 2008 Digicel Caribbean Championships (DCC), Group D, hosted by St. Kitts-Nevis.

The BVI, boasting a number of players born in other sister territories, lost both their matches, going down to St. Kitts 4-0, and in a much improved display, were edged out by Barbados 1-2.

In his comment after the Barbados game, Coach Williams, himself a former national captain whose career came to an abrupt end due to injuries, said as far as he was concerned, they came out victorious against the Barbadians: "I would say that I am very proud of my guys for the way they played against Barbados."

The BVI arrived in St. Kitts without a practice match having assembled as a team just two weeks earlier. The fact that they showed marked improvement after their first game loss proves that if they have access to proper facilities, they can be a much tougher force to reckon with.

It was revealed by Coach Williams that they are faced with a major challenge of not having a field of their own to play and practice and this is compounded by the fact that the majority of their players are construction workers. Coach Williams explains further: "You need practice matches to iron out your weaknesses and to plan strategies going into tournaments and games, so I would say that St. Kitts was our first practice match. We took a beating and we learnt from it, we came forward to the second game and showed that we can improve our performance day by day. So if we can play more football we can improve a lot and be a dominant force in the Caribbean also."

And what Williams is hoping for in the near future is a facility they can call home. He lamented that it is very frustrating for the players not having the appropriate conveniences to prepare.  He shared that what is available to them, a small hard surface, is not the ideal situation but they try to make it work: "We came into this tournament with a lot of injuries because of the surface we are using to practice, it is hard solid ground and it is affecting the player's joints. Also, half the team practices on a sister Island and we could have only come together two weeks before the tournament which makes it very difficult because the players cannot understand each other in such a short space of time the way they should. You need time to grove and build a team."

Williams, while recognizing the many challenges, also has some recommendations to bring the situation under control. He suggested that finances must be sought to assist the players at the national level to be able to play more football since many of them are construction workers and work for the better part of the day but still try to make it to training after work in the hot draining sun.  He also disclosed that some of the very players go to college as they seek to further their education. This kind of situation he says is a major set-back.

Commenting on the make-up of the team, Williams said that it can be a challenge sometimes but believes that if the game is to develop in the Caribbean it does not matter where a player comes from as long as he qualifies to represent a particular country given the FIFA rules, he should be allowed to do so: "As I see it, we are one nation and we all have to support one another for the best of football in the Caribbean."

The BVI team is made up of players from Jamaica, St. Vincent & the Grenadines and Guyana among others.

DCC and the Caribbean

Williams was high in praise for the Digicel Caribbean Championships and title sponsor Digicel for their initiative and commitment towards the development of the sport in the region: "I think Digicel is doing a wonderful, wonderful job for football in the Caribbean, they just need another company to come on board and assist them in what they are doing and to even start a semi professional league in the region so some of these guys can earn a living from the sport that will benefit them after they hang up their boots."

To back up his call for a semi pro league, Williams noted that a number of teams from Europe and elsewhere are looking towards the Caribbean for players because they recognize that players from the region are just as good as others from other parts of the world.

"It means that our football is maturing and growing. You had John Barnes who was down here not so long ago running the Digicel Kick Start Clinics and scouting youngsters and if it can continue this way I think we can take over football throughout the world." – Willams.

So, it's now back to the drawing board for the BVI and all the other countries who did not make it into the second phase of the third Digicel Caribbean Championships.

Surely, Williams will be working hard in conjunction with his local Football Association to ensure that efforts are doubled to ensure that they have what is necessary to prepare in a way that will see them competing at a higher level and even beating other countries in the region.